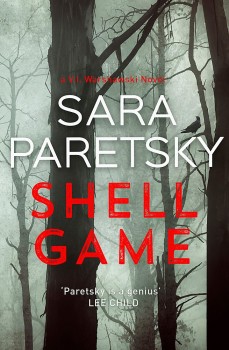 VI Warshawski is run ragged when the nephew of her closest friend is linked to a murder, and the niece of her ex-husband shows up desperate about a missing sister.

VI Warshawski’s 19th outing begins with a late night callout to a Chicago forest reserve where a corpse has been found. Police want to know why the victim had in his pocket the name and address of Felix, the nephew of Vic’s best friend Lotty. Felix professes not to know and is not very communicative, but the police suspect the matter may be related to terrorist activity, and Felix is in the spotlight.

Before investigations can get underway, however, Harmony turns up at VI’s door, seeking help locating her sister Reno who has gone missing. Harmony and Reno are the nieces of her ex-husband Richard, who helped Reno secure a job with Rest EZ, a sleazy payday loan lender. Reno’s attractive appearance secured her a recent trip to the company’s Caribbean resort, but since her return had been unsettled.

Vic devotes the next few days to these problems and makes steady progress. She identifies the dead man as Fausson, an archaeologist recently returned from Syria where civil war has facilitated the theft of antiques. She visits the Chicago institution with which Fausson had been associated and acquires a new boyfriend, Sansen.

Her other case is harder going. Rest EZ prove to be allergic to publicity, and no wonder since their large profits arise from 400 per cent loans and the promotion of worthless penny stocks. Richard, her ex, knows more than he is saying, so she infiltrates his office disguised as one of a team of immigrant cleaners to find out more. Russian heavies turn out to be part of the story and threaten mayhem before the end.

As a newcomer to VI Washawski I have to say I was much impressed. The plot remains entirely within the realms of possibility while being densely packed with incident, unfolding in a finely calibrated way that I can only imagine is the result of meticulous planning, although it doesn’t interfere with the natural flow of the story.

My reference for female US PIs is Sue Grafton’s Kinsey Millhone, but VI is something else, skilled with tech (and she has an expert on tap when necessary), proficient at picking locks and impressive in combat too, especially given her age. She has a lot of friends and shares two dogs with a neighbour. In one incident she shows a very commendable struggle to identify her priorities when she is faced with a wounded dog and a niece in shock.

VI also has the patience of a saint, coping with clients with serious trust issues who never give her the necessary clues to help her protect them. Despite this, she makes a last-minute rescue, brings down an evil-doer’s computer system and launches a amply-justified broadside against her feeble ex-husband. This is the kind of PI that you would definitely want on your side.