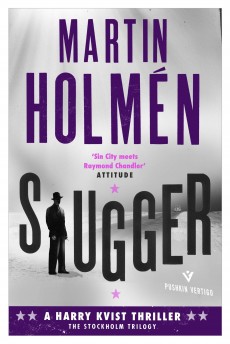 When a priest is killed in what is made to look like a Jewish atrocity, Harry Kvist has his suspicions. An opportunity for payback is difficult to refuse.

In this, the final part of the Stockholm Trilogy, Harry Kvist is planning to depart his native city and join his daughter Ida, who he has not seen since she was a child, in the United States. Kvist is a hard man: his life as an orphan, seaman, boxer and debt-collector has been a violent one. In the last few years it seems he has softened, although for his own protection he maintains a tough facade.

The book is set in a 1930s mid-summer, and as the city’s inhabitants swelter in the heat local Nazi sympathisers are much in evidence, bully-boys holding inflammatory meetings and walking the streets looking for trouble. As the tale begins Kvist’s friend Rector Gabrielsson is found murdered, apparently the work of Jews, but as Gabrielsson spoke out against the Nazis Kvist is inclined to believe the culprits are those who recently torched two synagogues.

Kvist’s skill in frightening others has not gone unremarked by the gangs in the town and he is recruited by one headed by Ma and her two loutish sons to help find out what a rival gang is doing on the wrong side of town. Harry discovers that the opponents are moving gold and guns for their Nazi friends. Ma’s plan for a hijack provides an opportunity for Kvist to strike back at those he despises, a last blow before he departs.

This is an excellent series, with Stockholm life as endured by the less well-off emerging in very convincing detail: unremitting toil punctuated by casual cruelty, dirt and pests. These were the most striking features of the first book, but as we have got to know Harry better we come to understand that despite the challenges of his environment there is more to the man than the brutal exterior he allows most of the world to see.

Despite the liberal use of his fists in daily communication, Kvist is also capable of great tenderness. He looks after the disabled undertaker Lundin, over whose shop he lives, and carries his ancient dipsomaniac dog Dixie to the park. On the basis that a dog year is equivalent to seven human years, Dixie gets a birthday every seven weeks.

As he contemplates leaving, Harry looks around at the city nostalgically, even painful episodes in his past life taking on a golden glow. His shame about the public exposure of his homosexuality is difficult to throw off, but he meets someone which suggests the future holds promise.

Only an optimist, however, would imagine Kvist can easily escape the city he knows so well. He has obtained false documents only at the price of letting his plans slip, and the hijack will involve bent police as well as the most powerful gang in Stockholm, providing a gripping finale to the series.