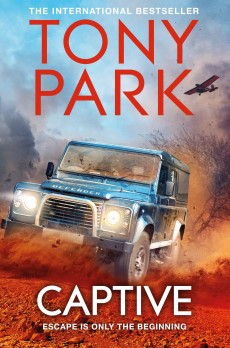 Australian lawyer Kerry Maxwell, in Africa to volunteer alongside vet Dr Graham Baird at a wildlife rehabilitation centre, finds herself a captive in a bloody feud on the frontline of the war on poaching.

The facts behind the latest of Tony Park’s gripping ‘faction’ adventure thrillers set in southern Africa are shocking. Last year in South Africa’s giant Kruger National Park – at around 7,500 square miles the size of Israel – poachers slaughtered 68 elephants and more than 500 rhino for their horns. In neighbouring Zimbabwe another 90 elephants died. Figures for Mozambique, from which nearly half all poaching raids into the Kruger originate, are unreliable.

Between 2009 and 2017 almost 750 rangers in African countries have been killed in the battle to protect endangered species against heavily armed poachers working for organised crime gangs involved in the multi-billion dollar business of selling tusks and horns to Arab countries or the far east where they are more valuable than gold.

This 15th – and so far the best – of Park’s series could hardly have a more dramatic setting. But this time, as well as the usual bloody shoot-outs, sex and romance, the former Aussie soldier, now a reserve officer, who spends half his year in Africa, also takes a long, hard and none-too flattering look at the ‘business’ of conservation.

The wealthy virtue signallers, the celebrity TV vets who take fees for ‘charity’ appearances, the professional fundraisers who work on a percentage, and the charities themselves all fall under his ruthless spotlight.

Park, who himself works with Veterans4Wildlife, an organisation which recruits former special forces soldiers to train and prepare rangers for the dangers of their job, spares no-one. The result is a story which is as compelling, brutal and unputdownable as anything from the pens of those masters of ‘faction’ Forsyth or Seymour.

Dr Graham Baird, a soldier-turned-wildlife vet and a functioning alcoholic who blames himself for his wife’s death, becomes involved in a shootout with poachers. Among the dead is the brother of a corrupt Mozambique politician and poaching kingpin – and he swears revenge for his brother’s death.

Caught in this bloody vendetta is Vietnamese-descended Aussie corporate lawyer, Kerry Maxwell, in Africa as a volunteer to work alongside Baird at a wildlife rehabilitation centre, who is kidnapped as bait for the curmudgeonly Baird.

As always Park, by far the best writer on modern southern Africa, brings the country alive with wonderfully detailed descriptions of the landscape and wildlife. His characterisation is brilliant. Many of the humans are based on people he has met and the animals which highlight every book – this time it’s N’sele, the fearless honey badger, reputedly nature’s most effective killer for its size – although larger than life are all utterly believable.

I find it difficult to believe that in a country of animal lovers, these clever and informative stories of the fight to save the world’s most endangered species are not an automatic fixture in the best-seller lists. Read them and I’m sure you’ll agree!