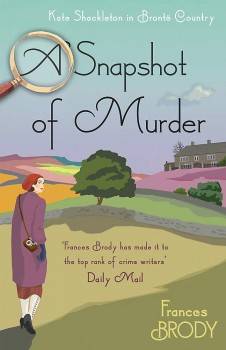 A Snapshot of Murder

Kate Shackleton organises a photographic society outing to Haworth, the heart of Brontë country. But when the most obnoxious member of the party is murdered, her planned break from detection comes to an abrupt end.

Frances Brody’s Kate Shackleton series are my favourite cosies, that strange sub-genre which treats murder as almost genteel and whose detectives are often high-minded, thoughtful and well-connected, if not actually aristocratic. Kate is all of those, and Brody deliberately portrays her as a little detached. While most of her other characters offer their own points of view, Kate, the only first-person narrator, often seems to lack emotional engagement.

A war widow could calmly look at pictures of her late husband or come face-to-face with the man whose marriage proposal she had turned down may appear a little cold. Even Brody’s writing style, short often clipped sentences, contributes to the picture of Kate as a practical, no-nonsense woman  – a proper Yorkshire lass.

But if she is a new character to you, first read the clever short story at the end which explains how she started in detection before you begin the main book.

Brody’s compelling heroine is a more than capable and self-reliant woman, clever and determined. A former Voluntary Aid Detachment nurse – one of those mainly upper-class women who often hectored their way to the front lines in the 1914-18 war to work under appalling conditions – she is a member of a group matured by experience who makes her case with quiet authority in a 1920s society which has still not come to terms with the idea women are not second-class citizens.

Kate is taking a break from detection at her Leeds home, indulging in her passion for photography. She organises a photographic society outing to Haworth, the heart of Brontë country. But when the most obnoxious member of the party, Tobias Murchison, is murdered, her planned holiday comes to an abrupt end.

Given the victim’s many failings, there is no shortage of suspects or motives to create a twisted tale of love, lies, deceit and betrayal. As always, the story is beautifully written, peopled by largely likeable characters with believable conversations and enough red herrings to keep you reading, and is a another quiet triumph for Kate and her creator.

The pacing of the first few chapters, devoted to a thorough scene-setting, makes sure the reader is well informed of the situation leading to the murder and will be surprised by the flow of unexpected reveals which follows.

Brody plays on the emotions by signalling the likely guilt of the one person who attracts the reader’s sympathy and the perpetrator is no great secret. The real mystery lies more in the why and the how and the tangle of emotions and secrets which are gradually uncovered – before what is a real shock in the final lines.

This engaging story is easy to read and positively breathes the atmosphere of its time and beautifully described setting. While some of the supporting characters – the unhappy wife Carine, Kate’s ever-enthusiastic niece Harriet, her pot smoking early hippy friend Rita, the reliable Mrs Sugden and Jim Sykes – may catch the imagination, it is the cool Kate, who as always, carries the story.