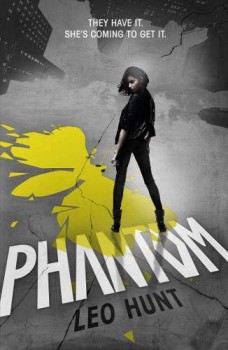 Talented hacker Nova is given the task of infiltrating one of the most powerful corporations on the planet.

Nova is a young hacker, living in a brutal and, chaotic undercity hundreds of storeys below the surface of a ruined earth, where poisoned water will rot your guts if it passes your lips. Things aren’t much better on the lawless levels where Nova lives, but at least it’s possible to survive there – just. Nova needs to steal money to stay alive. She does that by getting close enough to the workers on the higher levels to hack into their implanted chips that are responsible for nearly everything they see and do.

Stealing isn’t easy, though, and sometimes Nova barely manages to escape, fleeing back to the squat she lives in with Patches, a Fagin-like figure who needs the money Nova and others bring in to pay the protection he owes to the gang that owns that part of the territory. So when a top-level hacker offers Nova a job – a big one – infiltrating one of the most powerful and successful corporations on the planet by landing the position of personal assistant to its chief operating officer, she takes it, regardless of the risks.

Leo Hunt has conjured up a dark and distinctly dystopian future in which books are unknown, and all the information you might ever want is available through neural implants that transmit glifs, moving pictograms that have become the means for transmitting information and even emotion. There’s no need to read when you can see pictures inside your own head.

Humans live in enormous and elaborate cityblocs, massive skyscrapers that rise to almost unimaginable heights above the surface, and burrow to almost equal depths below it. Social and economic divides are as deep. There’s an underclass struggling to survive, middle-ranking workers who just do their jobs, escaping the soul-crushing boredom within their own heads, and then there’s the powerful elite who live at the top of the various cityblocs. There are also ‘moonies’, mostly prisoners or people desperate enough to accept a soul-stealing neural implant in return. Don’t anyone suggest that as way of reducing overcrowding in prisons and the amount spent on social care to our current government, please!

Despite a host of unfamiliar terms, Nova’s world doesn’t sound much different to the one we inhabit today so far as social strata go and it’s a stark reminder of where we might end up if the relentless trajectory of destroying fragile ecosystems on our own planet is allowed to continue.

Nova is tough and street-smart, but even so, the task of doing the dirty work of the top-level hacker known as the Moth stretches her to her limits. The world she operates in is both unfamiliar and familiar at the same time. Despite references to glifs, lumens (digitally induced hallucinations), the metanet (think a souped-up internet, as the name suggests) and a host of other terms, toilet technology doesn’t seem to have moved on, and at one point it’s necessary for Nova to stick her arm around the U-bend to retrieve a hidden item!

Phantom is a well-thought out YA sci-fi thriller with strong world-building and interesting characters. There’s a fascinating moral dimension to the concepts of high-end artificial intelligence that’s central to the plot, but despite all the futuristic elements, Phantom remains firmly grounded in an all too believable world.