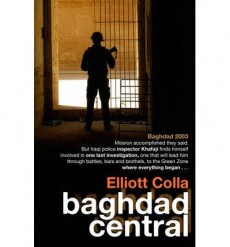 In post-invasion Baghdad, former police inspector Khafaji is seized by the Americans and pressed into unwilling service.

In 2003 post-invasion Baghdad, the American-dominated Coalition Provisional Authority have disbanded the military and civil institutions associated with Saddam’s Ba’ath party. Life is difficult and dangerous, and subject to the exercise of arbitrary power by the American military and various Islamic militias.

Muhsin al-Khafaji, formerly a mid-level policemen, is picked up by the Americans by mistake, but having come to their attention is pressed into service to select a core for a new police force. Khafaji sees no future in this, but becomes interested in the disappearance of young Iraqi girls working as translators, particularly when he realises his niece is one of those involved. The answers to this gradually become clear, but Khafaji’s life becomes no less difficult, and even his beloved poetry fails to show him a safe way forward.

The book is told in the present tense and relates Khafaji’s travails throughout, unvarnished or sometimes augmented by internal dialogue. Colla presents a convincing picture of Iraqi society immediately following the invasion, with daily news that the locals discuss ‘as if it were about fantastical stories from a distant planet.’ There is a ludicrous side: a briefing carried out to selected locals in CPA management-speak is hilariously mangled by the translator. But the predominant reaction can only be sympathy for the people caught in a showdown between irreconcilable philosophies.

Much has been said about the lack of Coalition planning for when the war was won; Baghdad Central suggests that planned or not, the speedy transformation of Iraq into anything resembling a typical Western democracy was clearly a pipe dream.

Khafaji himself is a sympathetic protagonist, sufficiently practiced in dissimulation under the old regime to adapt, keep out of trouble where he can, and stay alert to opportunities when offered. This is no mean feat given the disorientating circumstances, and when the chance arises, Khafaji proves to have both initiative and bravery. The offer to work for the CPA cannot be refused, but at least ensures the medical treatment that his daughter badly needs. Unfortunately, association with the Americans is unlikely to offer good long-term prospects.

A component rarely seen in a crime novel, if Baghdad Central can be so described, is the frequent reference to poetry which the protagonist uses to illuminate his experience and as a haven from reality. The author explains that in Iraq poetry is ‘part of living memory’, and in the book gives a taste of the poets whose works are widely spoken and appreciated. This is just one facet of Colla’s familiarity with Iraq: he talks with authority and integrates his knowledge into a compelling story. It is rare to find a first book of such high quality, and which gives such a penetrating and realistic insight into the impact of a forceful external shock to an ancient and singular culture.