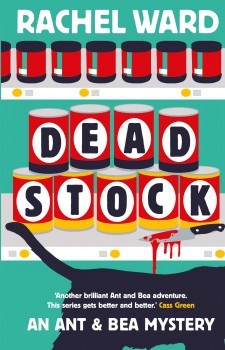 Supermarket checkout worker Bea and her friend and colleague Ant are on the case of a cat killer in Kingsleigh.

The Kingsleigh branch of supermarket chain Costsave has a new manager, George Prentice, bought in from the distant metropolis of Swindon, along with new ways of working, such as the morning ‘huddle’, a fancy name for a staff pep talk. Experienced checkout worker Bea Jordan and her shelf-stacker and general dogsbody friend, the dermatologically-challenged teenager Ant, aren’t impressed.

When they find a horrifically mangled dead cat in the cardboard stacking area behind the supermarket, Bea is determined to investigate, especially when they find out that the cat was the much-loved pet of one of their colleagues. A bigger picture begins to emerge as news gets out that cats are disappearing all over Kingsleigh. The police have started to take an interest, but as yet they have nothing to help them track down the culprit.

It says a lot about how much I liked amateur sleuths Ant and Bea in their first outing, The Cost of Living, that I stuck with them here in a book that has pet-killing as its central storyline. Pet death is one of my big no-nos in books and I’ve often fulminated about lazy writing and cheap shock tactics when the death of a dog or cat is used as a plot device to show how bad the baddie is. But I liked the supermarket duo very much indeed, so I gritted my teeth and kept reading, and I was glad I did.

Bea is still struggling to cope with her mother’s problems. Queenie, as she’s known, is borderline agoraphobic and despite some improvement at the end of the last book, she’s now having problems again and has lost her benefits, putting a strain on the household finances with only Bea’s wage now coming in. Ant’s having problems too, as his father, a career burglar, has been caught after breaking into houses and stealing Christmas presents, and his crimes have become common knowledge in Kinsgleigh.

Their investigations into the missing pets put them on collision course with local bad boys Dean and his friend Tank, who have no reason to love Bea as Dean blames her for the loss of his job at Costsave. When the pair are spotted with a white cat in a pet carrier, Bea gets suspicious and enquiries prove that neither of the two have a cat at home, despite their claims to ownership.

Rachel Ward expertly spins another clever mystery with an underlying edge of darkness that provides a reminder – if one is needed – that nastiness is never very far beneath the surface of any setting. Ant and Bea suspect the cats are being used to train fighting dogs and the pair are prepared to put themselves at risk to uncover the truth. Ward provides her characters with plenty of depth, from Bob-on-Meat whose friendship is a big help to Queenie, to Dot, Bea’s friend and fellow checkout worker.

The truth, when finally uncovered, overturned all the ideas I’d come up about who was doing what and why and proved, once again, that Ant and Bea are a duo worth getting to know. There’s plenty of everyday humour in the books – I particularly enjoyed the sketch with the dead cat in the freezer masquerading as packets of special offer fish fingers – as well as razor-sharp observation.

A trip to the supermarket will never be quite the same again once you’ve been behind the scenes with Ant and Bea.