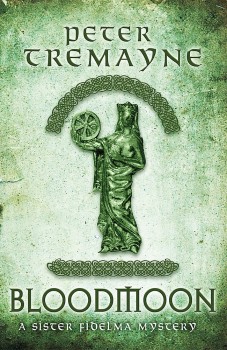 Sister Fidelma is sent on a secret mission to uncover a rumoured assassination plot against the High King of Tara.

Peter Berresford Ellis, who writes under the name of Peter Tremayne, is one of the leading authorities on the ancient Celts and 7th century Irish society, who has parlayed his knowledge of the ancient Brehon law system into a long series of novels – this is number 29 – featuring the lawyer/detective Sister Fidelma.

The Ireland of 671AD is its usual turbulent self. The five kingdoms, who all acknowledge the overall supremacy of the High King of Tara, are never completely at peace. Local chieftains go much their own way and robber bands infest the wilder areas. Despite the new faith – Christianity – becoming ever-more established, there are schisms between the influence of Rome and Byzantium and in many rural areas the old religions are still practised.

This story is set in what’s now County Cork and Waterford, then the country of the factious Ui Liathain. If you haven’t met Sister Fidelma of Cashel before, you’ll have a job following the various kingdoms, their allegiances and their common folklore. But Tremayne, as always, provides instant translation from the Old Irish and sketches the politics of a period when factions seem to have been constantly trying to overthrow one kingdom or another. A brief historical afterword outlines the facts on which this detailed medieval mystery are based.

Fidelma, a dalaigh (lawyer) of the Irish courts, and a woman of formidable intelligence, courage, wit and deductive power, who would stand out in any setting or age, is a Brehon and legal adviser to her brother, Colgu, King of Muman. She’s sent on a mission by the High King to investigate rumours of a conspiracy to assassinate him and abduct his wife, and is sworn to strictest secrecy on an ancient ‘geas’, a binding oath. She cannot even share her task with her ‘English’ husband, Eadulf of Seaxmund’s Ham, an Angle of the South Folk, leading to tension.

The investigation leads them and Enda, their young warrior/bodyguard, to the abbey of Finnbarr, but before they have a chance to speak to him, the abbot is murdered – and his young niece, suspected of the crime, has fled. As they follow her into lands that, while part of her brother’s kingdom, are ruled by local tyrants who will stop at nothing to further their own cause, rumours spread implicating Fidelma’s wider family, the Eóganacht, in involvement in the conspiracy. Their lives are in danger from the plotters – and a mysterious and ambitious Saxon warlord.

Tremayne’s masterly storytelling and excellent character portrayal brings fascinating life to the world he describes. The background detail is brilliant, covering a vast swathe of everyday life – including how to cook a hedgehog or an otter – and excellent characters, to create a vivid picture of ancient Ireland in the bogs, mists, rain and rare warm sunshine of a typical Meadhónach Gaimrid, midwinter.

The interplay between husband and wide, with Eadulf considering if he is even in the right country and capable of staying with the driven Fidelma, makes a great counterpoint to the complicated main plot as Tremayne delivers yet another must-read story for fans of historical fiction.