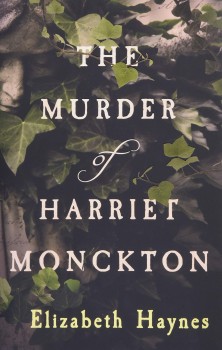 The Murder of Harriet Monckton

Harriet Monckton is found dead in the privy behind the dissenting chapel she regularly attended. An inquest lasting nearly three years tries to establish if she was murdered and if so, by who.

Elizabeth Haynes, a former police intelligence analyst, applies all her knowledge to recreate one the most baffling and talked-about murder mysteries of Victorian times which both shocked and fascinated a nation.

No one was ever arrested or charged, despite an intensive police inquiry, with detectives specially drafted in from London, and a near three-year long, often postponed inquest, which split opinion and caused endless rumour and suspicion in the Kent town. The jury eventually returned the inevitable verdict of murder, by person or persons unknown, but the coroner had his own ideas of guilt.

On November 7 1843, 23-year-old Harriet Monckton, a woman of respectable upbringing and religious habits, was found dead in the privy behind the dissenting chapel where she was a regular attendee. The townspeople were at first appalled by her death, apparently as a result of swallowing prussic acid – and even more shocked when an autopsy revealed that the unmarried Harriet was almost six months pregnant. But as the inquest drags on and initial fear of a killer on the loose subsides, the town begins to fall apart in a welter of suspicion, speculation and malicious gossip.

Drawing on the original coroner’s reports and witness testimonies, Haynes builds a realistically compelling picture of Harriet’s final days through the eyes of those closest to her and the last to see her alive.

Her inspirational, but cynical fellow teacher and companion, the lesbian proto-feminist Frances Williams; her sincere, but tongue-tied would-be fiancé Tom Churcher; the inspirational demagogue dissenting preacher George Verral, who confuses God’s love with his own insatiable sex drive; and her former landlord and first lover Richard Field are the principal witnesses – and suspects. Each has their own reasons to want her dead and each has a secret they want to hide. Haynes offers a masterclass of suspense as she tells the story of the two very separate lives of Harriet from their point of view, plus the dead girl’s own tale through her diary.

This colourful cast, supported by some of the local characters, the pompous, the plain gossipy and those with various axes to grind, an imaginative plot and dialogue and brilliant descriptive settings bring Victorian Bromley to vibrant life.

The book is captivating, masterful and moving, and you simply will find it difficult to put down. Haynes’ passion for Harriet’s story, explained in a touching afterword detailing her research, makes a fitting conclusion to a truly gripping and memorable piece of historical true crime/fiction that’s full of lust, mistrust and guilt.