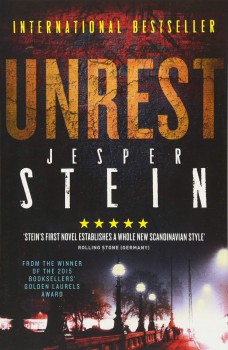 Detective Superintendent Alex Steen must investigate the death of a brutally murdered unidentified man, found outside a Copenhagen cemetery after a night of violent street riots. But Denmark’s national security agency is also interested in the victim.

Detective Superintended Axel Steen is assigned to investigate the case of an unidentified man found dead outside a Copenhagen cemetery following the night of violent street riots in Nørrebro, one of the worst areas in the city. The hooded and tortured body, handcuffed, strangled and dressed as an autonomist, shows signs of extreme brutality being used.
Examination of the area shows that the killing did not happen there. Two young officers on duty failed to see how the victim appeared at the scene and are soon interrogated as the potential suspects. Steen asks his unofficial contact at a TV station to see helicopter footage from the night which suggests police participation. He also realises that a rogue film from a camera mounted on the top of the building opposite the cemetery might shed some light.
But the camera lands in the hands of a young activist Piver who sees his chance to sabotage police actions and to impress other militant left-wingers, especially the former radical Martin Lindberg, now editor of Counterpress. Within hours Piver’s life is in danger, with the killer on his tail, and Lindberg being questioned, too.
Denmark’s national security agency, known as PET, gets swiftly involved, showing interest in the victim who turns out to be Enver Davidi, an Albanian drug smuggler from Macedonia. He’s been prosecuted years before, sent to prison and then deported from the country. PET know a lot but refuse to share much information. Steen wades through the details that he can obtain with great difficulty and becomes convinced that the police might be responsible not only for bringing back Davidi to Denmark to help them in some bigger secret mission but also for his murder. So he keeps digging.
Steen has all the characteristics of a typical bruised cop: fragile relationship with his ex-wife who had left him for PET’s big boss, overwhelming love for his five-year-old daughter Emma, serious heart problems, medicating insomnia with dope, frequent stepping out of line and stepping on official toes instead. He keeps being threatened with dismissal so often that he doesn’t seem to care. He might be infuriating but he’s also very human in his desire for Cecilie, lust for Davidi’s former wife Laila, and his wish for a calmer life.
Unrest, translated by David Young, initially seems like a slow ride, even though the magnitude of characters clamour for attention. However, that’s because of the fog of the unknown and the lack of collaboration between people who should be working on the search for the killer together. The reluctant appearance of facts eventually accelerates the plot into a fast-paced nerve-wrecking trip.
Jesper Stein’s novel will appeal to the fans of contemporary Danish crime fiction such as the Department Q series by Jussi Alder-Olsen and novels by the siblings Lotte and Søren Hammer, and enthusiasts of hard-boiled gritty TV series The Killing and The Bridge. It draws from the recent history: immigration from the Balkans, social problems, the complex status of the Freetown Christiania commune within the capital, and questionable connections between two opposing worlds – the law system and criminal gangs. The state of affairs is not for the faint of heart hence the stand Alex Steen takes, to absolutely follow the truth, brings some hope. Maybe not for himself but for the reader.