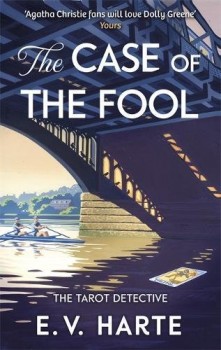 The Case of the Fool

“So he want kill me. Or he want marry me? Which?” Doris is faced with a stark question from a Russian immigrant tangled up in a web of squatters and drug dealers and needs to find her way out of the tangle before the first of those options becomes a reality.

We’re back with Doris the tarot-reader in Tinderbox Lane in South London. A Russian immigrant wants help with her relationship with her partner and drug-pusher. Posh squatters have moved into a house on the road. The two most irritating characters from the first book have moved in together and founded a residents’ committee to deal with the squatters. Doris’ daughter Pippa is seeing one of the squatters. And a fearsome Brazilian ex-stripper, who owns the property with the squatters, is taking direct action to deal with them. You don’t need to be a psychic to know that this means trouble.
Doris has to find her way through this minefield, alternately helped and hindered by her daughter Pippa and neighbours Professor Derek West and Rosie Buck. Her principal concern is Marina, a Russian immigrant who may be in danger from her boyfriend, a drug-dealing layabout. But Marina doesn’t seem to want to be helped that much. And then there’s the involvement of Geordie, one of the squatters and Pippa’s new boyfriend. Something is wrong there and the tarot cards are providing more questions than answers in Doris’ investigation of the issue.
The problem with psychic detective stories is stopping their abilities acting as a deus ex machina to solve the crime without any work on their part. EV Harte managed that well in the first book, but here, apart from an initial insight, Dolly’s psychic abilities pretty much desert her until the last few chapters when she suddenly finds the answer.
Even then it takes a character ruminating on their crimes to explain the mystery, something that they have previously felt no inclination to do despite earlier chapters from their point of view. It makes the ending seem very rushed. The twist at the end also means that one character’s actions at the beginning don’t hold true to a personality capable of that particular action.
This is an entertaining enough story, with comedy highlights, but the ending left me feeling disappointed.