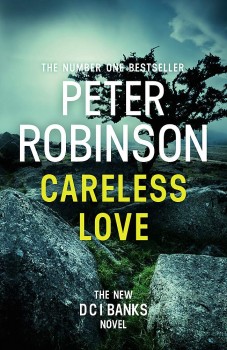 Superintendent Alan Banks and his team investigate two suspicious deaths – a student found in an abandoned car, and a man in a smart suit at the bottom of a gully on the moors.

It’s time to light the candles on the cake, as Peter Robinson’s Alan Banks series has reached its 25th book. The hero would probably prefer a glass of Scotch to a slice of cake, though.

One of the things that’s kept me hooked on this series is that Robinson’s hero and the plots are generally nicely understated. Banks is a good cop, operating without a metric tonne of personal baggage, and the people around him are the ones you’d want on your side in an emergency. Yes, his marriage broke up years ago, he enjoys a drink, and there’s occasional wistful thoughts about his love life, but it’s all low-key.

This less strident tone than many we encounter in the genre is possibly what’s counted against TV adaptations of the books. Stephen Tompkinson isn’t Banks in any way, shape or form – he’s too big and shouty, for a start.

The general feel of Careless Love is quiet and leisurely – which is a bit odd, considering two strange deaths open the book. A college student has been found dead out in the sticks, sitting in a car that’s not hers and that has a ‘police aware’ sticker on it. Then the body of a man in a smart suit is found at the bottom of a gully out on the moors.

Banks (who’s now a superintendent, not a DCI, despite what it says on the front cover!) is now heading a very compact team of detectives – just him, Annie, Winsome and Gerry. And it’s likely to stay that way, given police cutbacks. One of the strengths of the series has been the feel for the way investigations inch forward and the frustrations that the police encounter.

Not that that realism always makes for good fiction. So Careless Love is a slow burner, with a long, rather too convenient, reveal at the end. In many ways the subplot (such as it is) which features Zelda, the much-younger eastern European partner of Annie’s old hippy father Ray, and her mysterious observation job in London is more intriguing. I think it’s a safe bet that Robinson will return to it next time out. If you’ve kept up with the series, you’ll know that Banks has always had half an eye on what the spooks are doing in London – although that angle has never overwhelmed the books.

I do need to have my annual moan about Robinson’s lack of research into the UK education system, though – further education colleges and universities aren’t the same! So it’s anyone’s guess which Eastvale College is meant to be. And I can assure him that I haven’t seen a student wearing a leather jacket since dinosaurs walked the earth! A fair few long-running series have outstayed their welcome, but that’s not true for Banks and Co. Careless Love isn’t vintage Robinson by quite some way, but it’s still a decent addition to a thoughtful and well-measured series.