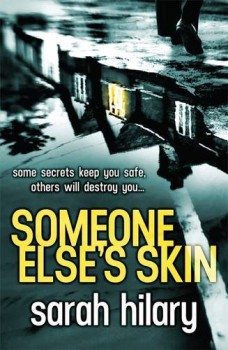 DI Marnie Rome and DS Noah Jake are called to a women's refuge where a man has been stabbed. What they find turns all their expectations upside down as the violence escalates.

It always seems to be night time in Someone Else's Skin - either that, or we're in dingy rooms or under harsh neon lights. If someone films this stunning debut novel - and I really hope they do - it'll look really spooky. I am already casting it in my head.

Sarah Hilary's debut novel, on the face of it, introduces a damaged detective with her own demons to deal with. But you soon realise that this is no cliched creation, and the main character's nightmare past never threatens to unbalance the book.

DI Marnie Rome and DS Noah Jake form an unusual but credible double act faced with a domestic abuse case which, on the surface, appears straightforward. They're called to a women's refuge where Hope Proctor's husband Leo has been stabbed. As the police battle to save his life, they realise they're faced with a raft of unreliable witnesses and a load of questions that no one seems very keen to answer. And this is just the start of the violence.

Someone Else's Skin is so intricately and cleverly put together that any more plot details run the risk of becoming spoilers. It weaves together Marnie's past where her parents were  killed five years previously, the lives of women forced to flee to the refuge and domestic abuse across both Hope's life and that of a young Asian girl who is being pursued by vengeful brothers.

Hilary possesses that enviable ability to create truly memorable characters – and makes the reader care about them. I was particularly taken by the clearly delineated women in the refuge, and by DS Jake, who has his own issues to deal with. There are no one-dimensional walk-on parts here; each character is a vital part of this huge puzzle. In fact, the book reminds me of one of those giant multi-piece jigsaws that at first appear unsolvable, but gradually take on a distinctive shape.

Someone Else's Skin is unusual, powerful and very touching. It turns upside down all your expectations and blows them sky-high. This is a blistering debut from an exceptional writer that cleverly subverts all the reader's assumptions and leaves them thoroughly uncomfortable and totally wrung-out.