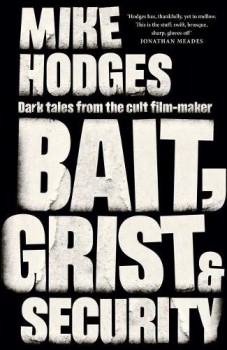 Three novellas combined in a single volume give a very penetrating examination of the worlds of book writers, the cinema, and personal improvement courses.

At a British seaside resort in midwinter, dodgy promoter Mark Miles is under pressure when one of his prospects Reg Turpin, the New Houdini plummets to the bottom of the harbour, becoming Bait. Another ‘client’, Dr Herman P Temple, is arriving to run a leadership dynamics course at the Grant Atlantic Hotel.

Miles is bribed to attend the course himself to gather evidence against Dr Temple and his acolytes, who turn out to run a rather challenging programme. Participants are humiliated to a degree sufficient to convince all of the benefits, although one tied to a cross as penance for his cynicism pays the ultimate penalty.

The second story, Grist, is set in East Harlem in midsummer. Author Marshall Grist has been earning millions from best sellers reproducing as fiction the lives of characters summarised in every detail by ex-journalist Fat Jay. When gangster Primo Vargus sees his life on the screen, he finds Jay and together they organise payback.

To take their revenge in full, they find the subjects of other Grist best sellers: an alcoholic impersonator, an ancient ex-movie star with a traditional means of getting parts, a rapacious cosmetic surgeon and a one-eyed fraudulent accountant. Considering the divergence in the group, they manage to organise things effectively, although things do not end particularly well for them, and certainly not for Grist.

The third tale is a Hollywood story, an actor holed up in his hotel room waiting for acceptable signals from his producer Zigzager, who becomes increasingly manic as the bills for an idle studio accumulate. Outside his room Rattle, a man who provides the security which gives the title to the piece, converses with the night porter Boulder and various other functionaries of the studio and the hotel as things take a decidedly weird and murderous turn.

Mike Hodges is better known for his work in TV and cinema: Get Carter, Pulp, The Terminal Man. His bleak view of life and macabre sense of humour comes across strongly in these novelettes, with self-interest a universal over-riding preoccupation, defeated only by incompetence or excessive greed. It can also be very funny at times.

At the same time, the feverish way the stories are built up to a crescendo give the reader little relief, and some will find the remorseless satire too overdone. If you enjoyed Tom Sharpe’s Wilt stories this may hold appeal; there is the same sense of reality becoming increasingly warped and distorted to a point of insanity. The picture of life presented here may strike you as a welcome counterbalance to the Disney perspective, but it’s terribly dark.