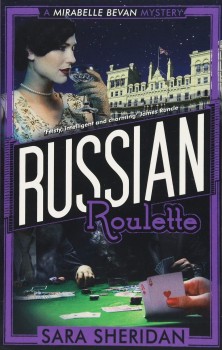 Upper-class debt collector and amateur detective Mirabelle Bevan becomes involved with a brutal murder and must cut through an iron curtain of call girls and high stakes gambling to find the truth.

Despite the relatively recent time setting, many readers will be surprised at how much public attitudes have changed in little more than 50 years. Britain is gradually emerging from the post-war austerity years, but casual racism – this is before Windrush and the first influx of West Indian immigrants – is still ingrained. The treatment of women, despite millions having worked in wartime factories making everything from shoes to shells, was still positively Victorian. Many pubs would not serve a lone female.

Edinburgh-born Sheridan’s historical perspective is spot on and allied to her accurate descriptions of the changing fashion, the attitudes – and the inbuilt corruption of a nation where the black marketeer and the spiv had been wartime kings – builds a convincing picture of the age.

When Mirabelle’s on-off boyfriend, Brighton Superintendent Alan McGregor, is taken off a gruesome stabbing murder of a young wife because the only suspect is an old school friend, he asks her to keep an eye on the case, because he is unhappy that the investigating officer will do anything but pursue the obvious. Mirabelle is aided by her Jamaican partner Vesta, the organisational heart of the debt recovery service they run, and finds herself in a morass of call girls and high stakes illegal gambling that surrounds the death.

As she probes further, McGregor’s own integrity is called into question. When a war hero’s body turns up on the Downs, she is glad when he is assigned to discover how an obvious suicide managed to kill himself somewhere else.

As Brighton’s wealthy establishment closes ranks, and without McGregor to watch their backs, Mirabelle and Vesta find themselves in a dangerous situation. And when the dead man on the Downs turns out to have been a member of a thrill-seekers club, related to the earlier murder and illegal gaming, both their lives are in danger as they bid to crack an establishment cover-up and uncover the truth.

As well as the fraught investigation, both women also face personal problems. Mirabelle must resolve her relationship with McGregor, now stretched to breaking point, and an uncertain Vesta must somehow find the courage to tell her husband that she is expecting their first child.

Don’t be confused by what often appears to be a cosy mystery. The storylines are genuinely gritty. Beautifully realised and vivid characters, both heroes and villains, the atmospheric Brighton setting and a plot that zips along will keep you reading to the very end.

Mirabelle Bevan is very much a modern woman. Beneath a rather prim exterior lies a fearless, fly-by-the-seat-of-her-pants character with a dogged tenacity. Vesta, intelligent and sparky, reflects the doubts and uncertainties of her race and age, but is beginning to emerge from her shell to become a crucial partner. Although this multi-layered tale has murder and serious crime at its heart, Sheridan manages to convey both character, charm and even a certain sense of fun, with the ‘naughty’ Brighton of the 1950s a perfect setting.

This is a clever, well-written and quite believable story of detection by two determined and intelligent woman years ahead of their time.