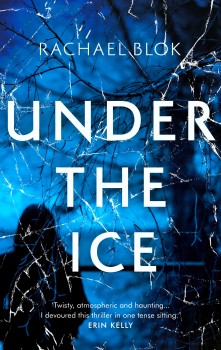 A girl’s body is found in a frozen lake. As the police investigation struggles, neighbours in a close-knit community turn against each other – and a young mother’s strange visions may hold the key.

This twisty and atmospheric debut from former teacher Rachael Blok is absolutely riveting. It’s a tense, emotionally charged and evocative thriller, filled with vivid characters, and is almost a perfect balance of fine writing and brilliant storytelling to produce an aura of suspense and a chill which matches its midwinter setting. The overall effect is a taut and haunting story which will get under reader’s skin.

It is the week before Christmas. The ancient cathedral city of St Albans, now largely a commuter dormitory, is shivering under a blanket of snow when the frozen body of a teenage girl is discovered by an ice-covered lake.

As initial leads fail to offer solutions and the police scramble for clues, new mum Jenny Brennan, the sleep-deprived mother of a four-month-old, begins to see strange visions. Would you believe her stories of ghostly voices, sleep-walking in the middle of the night – when she finds evidence police searches have missed?

Then another, even younger, girl goes missing. As the community unravels, neighbour turns against neighbour and even Jenny has doubts about who to believe. As Christmas Eve approaches, she uncovers a secret about her own past – and a vita clue as to why she could be key to the mystery.

Dutch-born DCI Maarten Jansen is the man responsible for solving the double crime. He’s a solid policeman and family man, with his wife and two daughters established in the local community – the missing girl is a close friend of one of his daughters – and, unlike so many fictional alcoholic, go-it-alone or serially unfaithful fictional detectives, his only personal problem is considering a possible move back to Rotterdam.

It is this sheer normality – and that of his team – which makes the procedural side of this story so believable. But it is the character of Jenny Brennan which carries this twisty and at times near unbelievable tale. Readers, particularly women, will recognise and feel her tiredness, doubts and frustrations. Her husband Will is a decent man, but his way of coping with new fatherhood is to work harder at the office, and his question: “Have we written Christmas cards for my family?” could well sum up a lot of relationships!

This is a truly outstanding debut. But where does Blok go from here? Plenty of her readers will want to see a return for Jansen and his team, but can she ever find another Jenny to anchor and focus such a gripping story?