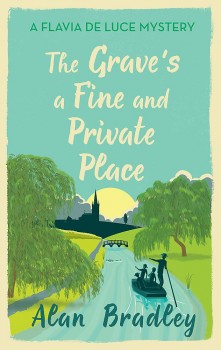 The Grave's a Fine and Private Place

Flavia de Luce’s family holiday is enlivened when she finds a dead body in the river. Naturally, she’s determined to investigate.

Following the sudden death of her father, 12-year-old Flavia de Luce’s mind is still in turmoil. It seems likely that Buckshaw, the crumbling family seat, will have to be sold at the insistence of her meddling Aunt Felicity, something that Flavia views with mounting horror.

To take their minds off the uncomfortable realities of life after the death of their father, faithful family retainer Dogger takes Flavia and her older sisters Ophelia and Daphne, otherwise known as Feely and Daffy, on holiday. Flavia is decidedly bored during a punting trip but, whilst trailing her fingers in the water, they snag on something – the teeth of a dead body that’s floating in the river.

Flavia, immediately in her element, is determined to discover how the man died, as her mind naturally leaps to murder as the most likely reason for a man, dressed in a strange blue silk costume and wearing one red ballet slipper, to end up dead in a river. Smelling something of chemical origin on the dead man. Flavia surreptitiously takes a sample from his lips and also riffles through his pockets, finding a small piece of paper with a set of numbers written on it. As ever, the whole thing is right up Flavia’s street.

She’s helped in her investigations by the ever-insightful Dogger, but is hindered by a local policeman who’s entirely too bright for Flavia’s liking. She prefers her local bobbies on the dense side, as they give her less trouble that way. She’s also immediately suspicious of the wife of the publican in the inn where they’re staying, as the poems she’s so keen on seem to hold an uncanny echo of the death of Orlando Whitbread – the man in the water. To complicate matters further, the dead man’s father was hanged for the murder of three of his parishioners.

Alan Bradley’s Flavia de Luce novels, set in the early 1950s, evoke the bygone age of amateur detection, although there’s certainly nothing amateur about Flavia’s interest in chemicals, poisons, and science. The books are hard to categorise, and despite the age of the protagonist, I’d hesitate to describe them as being written for young adults. They seem intended to appeal to an older audience who will be charmed by Flavia rather than identifying with her.

And charming she certainly is. She’s also intelligent, sneaky, daring and loyal. Her relationship with Dogger, who served in the Far East during the war, and was left mentally scarred by his experiences, is one of the lynch-pins of the book. Flavia depends on Dogger for stability in her rapidly-changing life, but is also fiercely protective of him, especially when circumstances conspire to trigger one of his debilitating flashbacks.

Flavia’s investigation into the death of Orlando Whitbread and, as an aside, into the murders his father was convicted of, is as complex as ever, bringing together her knowledge of chemistry and her sisters’ love of poetry, something Flavia had previously never seen the point of. Bradley weaves a complex web, and at times I was somewhat adrift, as well as being distracted by the constant use of American spelling that betray Bradley’s Canadian origins and sit ill with the quintessentially Britishness of Flavia and her ever-eccentric extended family.

My main gripe is that the books need a damn good Brit-check, but otherwise they’re every bit as charming as their author clearly intends and will appeal to anyone who enjoys puzzles and likes well-mannered cosy crime, with an added frisson of danger. I have no idea how long Bradley intends to continue writing the series, but I’ll be very happy to see what happens next for the de Luce family, and I hope a way can be found for Flavia to keep her beloved Buckshaw and her partnership with the enigmatic Arthur Dogger.