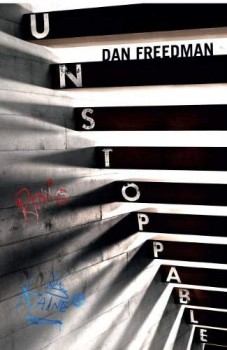 Fourteen-year-old Roxy and Kaine are twins. Roxy’s ambition is to win Wimbledon, Kaine’s is to play professional football. Together, they used to be unstoppable, but that was a long time ago.

Roxy and Kaine are twins. When they were seven they were best friends and vowed always to watch out for each other. Now, at 14, that sense of solidarity is a thing of the past. Roxy used to dream of winning the Wimbledon women’s singles final. Now, beaten down by her dad’s overbearing training, she hates playing tennis and wishes she could go back to just playing for herself, rather than constantly having to live up to his exacting ambitions. But there’s a big county match coming up. And he’s determined that she’s going to win, whether she wants to or not.

Kaine is a talented football player on the verge of a big breakthrough. He’s also constantly in trouble both at home and at school. He doesn’t see the point of going to lessons when what he wants to do is play football professionally. He constantly plays up in class, and at home he rows constantly with his father, who he no longer respects since he lost his job. Kaine’s mother does her best to keep the family together, working all hours and trying hard to keep the arguments at bay. As Kaine’s behavior spirals out of control, he starts to get sucked into the war for control of the Compton Estate between gang boss Sheldon Statham and his rival Ellis Small.

Unstoppable takes a penetrating look into the dark heart of parental pressure and vicarious ambition. On the rare occasions when Kaine’s dad sees his son play, he’s the very worst sort of touchline dad – shouting instructions, criticising, complaining and arguing with the referee. He’s living proof that for some people it’s all about winning, not playing the game. But for him it’s Roxy’s ambitions that matter, not Kaine’s, and since losing his job, he’s thrown himself into his daughter’s coaching, never giving her any respite from his constant demands as he insists on controlling every aspect of her life.

The twins are both absolutely believable characters and even when Kaine is kicking off at school – and not in a way that involves footballs – he stays likeable. I know next to nothing about football, but I was thoroughly caught up in the authentic feel of Dan Freedman’s pacy, authentic teen thriller. The details of Kaine’s dangerous flirtation with gang culture were chilling, as were the reminders of the dangers of life on the streets. Barely a day goes by now without a report of a fatal stabbing, often involving teenagers, and Unstoppable demonstrates how easy it is to fall into that trap. The echoes of the death of Stephen Lawrence were still raw, even after nearly a quarter of a century, and sadly there have been all too many other cases since.

Freedman depicts the highs and lows of the twins’ lives with honesty and integrity. I was desperately hoping things would work out in the end for both of them and their parents, but it’s by no means a certainty that there will be any sort of happy ending as Kaine’s destructive spiral gets out of hand, and tragedy strikes Roxy. This was a story that grabbed me by the scruff of the neck and didn’t let go until I’d turned the final page and I was cheering both of them from the sidelines the whole way.