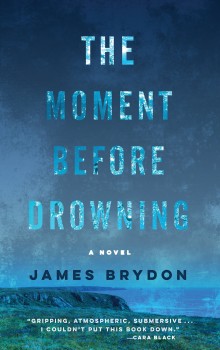 The Moment Before Drowning

Jacques le Garrec, a French wartime resistance leader and former policeman, has just returned from two years’ service in Algeria during the colonial war. He has been sent back to France to stand trial, having been accused a committing a brutal crime.

The Moment Before Drowning is set at the time of the French colonial war in Algeria.  Captain Jacques le Garrec, formerly a policeman and hero of the French Resistance, has just returned after two years’ service in Algeria with the French army intelligence services.  He has been accused of a brutal crime – not immediately specified – for which he is to face trial in Brittany. The trial is to go ahead despite the fact that he has clearly been traumatised by what he has experienced.

Whilst awaiting trial he is asked by an old friend, Erwann, to look into the murder of a young girl which had taken place during the previous winter. Her body had been mutilated and then simply left lying in open country, with no attempt at concealment.  According to Erwann, Captain Lafourgue, the investigating officer, had abandoned the case when it became clear that there would be no quick solution.

Le Garrec points out that he is no longer a policeman, that he has no jurisdiction in Brittany and cannot, therefore, undertake any such investigation.  Nevertheless, having spoken to Lafourgue and obtained his permission, he agrees to do as Erwann asks.

He begins his investigation with three men who had been Lafourgue's main suspects.  One was a down-and-out who slept in cowsheds and ditches, another a son of Russian émigrés and a member of the Communist Party and a third a descendant of an aristocratic family whose fortune had been squandered long ago. It seems clear from Lafourgue's notes that, whilst each had something to hide, and whilst he was prejudiced against all three, there was no real evidence connecting them to the murder.

What is most striking about Le Garrec’s investigation is that he appears incapable of carrying it out without memories from his time in Algeria coming back to haunt him. It becomes obvious – more and more so as the book progresses – that he has been deeply affected by horrors he has seen there. We are not immediately informed of what these were but it gradually becomes clear that one incident in particular, involving the death of a girl, is at the root of his trauma. He seems unable to separate the two deaths in his mind, an inability that eventually causes him to make a profound mistake.

One of the striking features of the novel is the care taken over the settings in Brittany and Algeria. There is a certainty of touch in the descriptions of both, occasionally a little repetitive, but very convincing.

Particularly so is the account of behaviour in the army intelligence services. The scenes of torture are very graphic and make for unpleasant reading. No doubt there were senior figures who behaved in a more humane way, but it is not difficult to believe, given the hatred on both sides, that sadists like Lambert actually existed

The ending, whist not the one that might have been expected, is one that has occurred many times in literature of all kinds but it doesn't seem in any way hackneyed. This is because the author has taken the trouble to detail the psychology involved in the murder and convinces us that what happened was a consequence of an aspect of human nature that never changes.