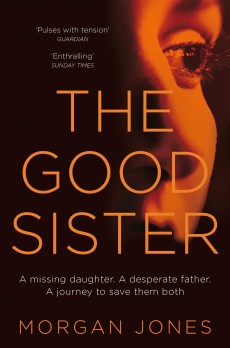 When a 17-year-old girl makes her way from the UK to Syria, her father is determined to find her and bring her home.

Sophia Mounir has achieved notoriety as a young girl who has made the journey from the UK to join ISIS in Northern Syria. Her parents came to the UK from Egypt, but when Sophia’s mother developed schizophrenia her father fell apart, relying on whisky and pills to keep him going. Repugnance for her father’s weakness and what she sees as the pursuit of hollow pleasures in Western society has driven her to seek a purer way of life.

Her departure shakes her father Abraham from his lethargy, and he follows in her wake, ending up on the Turkey/Syrian border. There he stands out as an outsider, and the contending parties – ISIS, other groups fighting Assad, Kurds, and even Turkish Government agencies – are either hostile or seeking to use him. A friendly couple of locals and some bribery eventually help him gain entry into Syria.

Penetration of Raqqa, where Sophia is living, is even more dangerous and to stay alive he has to declare himself an ISIS supporter, putting his medical training to use on their behalf. Abraham has been keeping in touch with Sophia by posing as a young French would-be jihadist, but initial contact with Sophia is problematic: his daughter remains committed to her new cause.

However, Sophia is quickly learning the true face of the regime she has joined. Her guides and instructors put her through an increasingly barbaric series of tests designed to assess her willingness to punish transgressions of Sharia law. She is given the job of ‘instructing’ Yazidi women whose men have been killed and who have little better to look forward to but slavery and rape. She is married off, firstly to a young fighter, but when he dies fighting to a bestial commander known as ‘the Russian’.

Sophia has great courage and willingness to dedicate herself to the cause of others, but is an intelligent girl and when she learns that a young girl in her own household is being bestially raped by her new husband, she is finally moved to take action to extricate herself from the terrible situation in which she finds herself. Abraham is ready to assist, but whether the two will be able to save themselves looks unlikely.

The author paints a very bleak picture of ISIS, essentially of men living out their fantasies and worst impulses, imposing the most ghastly constraints on women and children, and justifying their behaviour by selective reference to the book they claim to live by. The prospects of those caught up in such a twisted philosophy can only be negative, and for many entirely terrible.

The story of the two protagonists is skilfully balanced; the tension is maintained throughout the book and the finale is gripping. To match the drama of the theatre in which it is set, the characters have to stand out as something special and by the end the reader is convinced that they are truly singular.