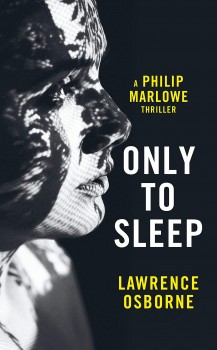 Philip Marlowe comes out of retirement to investigate a man said to have drowned on a Mexican beach, leaving a tidy sum in life insurance to his attractive widow.

Lawrence Osborne takes Raymond Chandler’s most famous character and envisions him in 1988 living quietly in retirement on the US/Mexico border at the age of 72. Not so retired, however, that life in the old dog is entirely extinguished, and so Marlowe is tempted to climb back into harness when two representatives of the Pacific Mutual insurance company call on his services.

The Pacific Mutual have paid out on a $2 million life insurance policy on Donald Zinn, reported drowned in a swimming accident in Caleta de Campos in Michoacan. They would like Marlowe, who is fluent in Spanish, to visit and check the circumstances. For $300 a day expenses, he takes the job.

A bit of sniffing around before he goes south establishes that Zinn and his wife Dolores Araya were carrying a mountain of debt when Zinn died. He visits Dune Palms outside San Diego, a Zinn development speculation which is rapidly returning to desert, and meets Mrs Zinn, who is about 40 years younger than her husband and very attractive. Marlowe sees enough to raise some scepticism about her story.

When he arriveds at Caleta de Campos, the local police assure him that Mr Zinn’s death is attributable to an accidental fall from a yacht while intoxicated, a yacht which regrettably cannot be traced. The early cremation of the body was at the request of Mr Zinn’s wife. Asking around, Marlowe establishes that there was indeed a body on the beach, but the identity is a different matter.

Some modest financial inducements give Marlowe a hint that the movements of a Mr Paul Linder might be of interest, and eventually the trail leads him back to Dolores. He has enough to satisfy Pacific Mutual, but by this point it seems his objectives do not entirely align with that of his employers. Marlowe holds the cards, but what, exactly, is he seeking to achieve?

This is an excellent re-envisioning of Marlowe in later life: still as cynical and smart as ever, if a bit slower on his feet and subject to some aches and pains. As he follows his quarry he ruminates about past episodes from his life, mostly from the 1940s and 1950s, largely featuring women he spent time with and what he was drinking at the time. He still has an impressive thirst, although regrettably inclined these days to require assistance back to his hotel room after an evening at the bar.

In the way of private eyes he still proceeds by means of pushing himself into areas that prudence would forbid, and his shikomizue sword cane comes in handy on one or two occasions. Marlowe’s motivations remain somewhat complex to the last, in typical Chandler style, but the plot is no more than usually obscure.