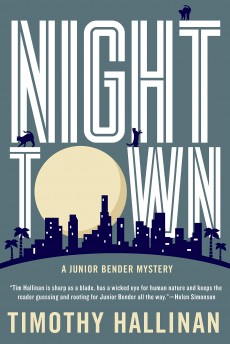 Los Angeles burglar Junior Bender takes on a commission, although the money offered looks a little too good. When a competitor is killed he wants to know why.

An offer of $50,000 to steal a doll from an empty house looks suspiciously generous, but Los Angeles burglar Junior Bender needs the money – his girlfriend Ronnie wants to retrieve her son from her mob-connected ex, and the snatch will not come cheap. Inside the house he is surprised to find he is not alone: a competitor, a girl going by the name of Lumia, got there before him and already has the doll.

It turns out that the two are already acquainted, and apparently being paid by the same people. As both suspected, the value of the doll lay with an item concealed within, but the doll has been cut open and the contents already taken. Lumia leaves to join the couple who hired her, only to be killed immediately thereafter.

Bender is upset at this entirely unwarranted murder, and takes steps to identify those responsible. Both Bender and Lumia had been put in touch with the hirers through separate agents, but Bender’s attempts to question them enjoy only limited success.

An alternate route of enquiry by researching the history of the house and its past residents makes better progress. The sole owner was a single woman who had spent her entire life in the house and only recently died. Her wealth was inherited from a man who accumulated a fortune from crime. Bender eventually finds the information he needs to explain who is looking for the doll, and to take action against those who deserve to be punished.

This is the seventh outing for Junior Bender; the author also writes the Poke Rafferty series, based in Bangkok. Both display a knowing and literate sense of humour that keeps things light, no matter how dark the events. You would have to be pretty credulous to believe burglars really operate like this, but there is still plenty to like.

I particularly enjoyed agent Itsy Winkle, whose home is protected by tall steel spikes backed up with an eight-foot wide piranha-filled moat, and Bender’s luxury flat housed within a block deliberately left decrepit externally (to all appearances, including taped noises to suggest that the lifts were about to fail). Also excellent is a hit woman with a business card ‘One-shot Solutions’.

The dialogue is snappy and frequently witty, and many of the asides are amusing: I particularly enjoyed one character described as an ‘extravagant collection of character flaws’. We get an explanation of the derivation of the word ‘sterling’, and a very proper appreciation of first editions of some old classics that Bender comes across. The supernatural gets a run-out too, with a historical character rubbing shoulders with Arthur Conan Doyle, who was famously into fairies and all that sort of thing. There’s plenty here to entertain.