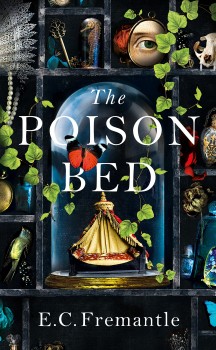 Amid the religious and political rivalries of the Stuart court of James 1, Frances and Robert Carr, one of the most powerful couples in the land, face death on suspicion of murder.

Following her Tudor trilogy, EC Fremantle turns her attention to the divided court of James 1, son of the Catholic Mary Queen of Scots and first Stuart king of England, in a riveting story of lust, ambition, power and murder.

In a combination of historical fiction written in the style of a modern thriller, she chronicles the rise of Robert Kerr or Carr, son of a minor Scottish aristocrat, and his wife, Frances Howard, Countess of Essex, to an almost unchallenged position of power – and their spectacular fall.

The facts of the life and scandals of the Jacobean court, inasmuch as they are known, are relatively simple. Fewer than five years after the Catholic-inspired Gunpowder Plot, there is still a battle for influence over the indecisive James between Protestant lords, led by the Earls of Essex, Pembroke, Southampton and traditional Catholic aristocrats, dominated by the Howard family, Earls of Northampton and Dukes of Norfolk, several of whose recent ancestors had gone to the execution block for treason.

Carr, who has been promoted beyond his abilities, and made Viscount Rochester, a Privy Councillor, a Knight of the Garter and subsequently Earl of Somerset, depends on his friend and former lover James Overbury’s advice to keep his job and favour with the King. But Overbury will do anything to prevent his friend ‘ruining’ himself over Frances Howard with whom he has become obsessed – even to the point of revealing the truth behind Robert’s friendship with James and risk bringing down the monarchy.

Frances, the fascinating and beautiful daughter of Lord Thomas Howard, later Earl of Suffolk, but heavily influenced by her uncle Henry, Earl of Northampton, was married at the age of 14 to the 13-year-old Robert Devereux, Earl of Essex. The marriage, a political union between warring factions, saw them separated after the wedding with the view that premature sex and pregnancy was to be avoided.

This gripping and fascinating story of intrigue and murder is a toxic blend of glamour, intrigue and ambition, laced with enough salacious gossip and description to make it a real page-turner once the reader can get to grip with the facts and characters.

Fremantle tells us this is fiction, but with no contemporary accounts, it is impossible to prove the truth and she offers a very plausible tale of what might have happened. The His and Hers narrative, and its eventual shocking denouement, makes this a triumph for an inventive and skilful author and an absolute must-read for fans of historical fiction.