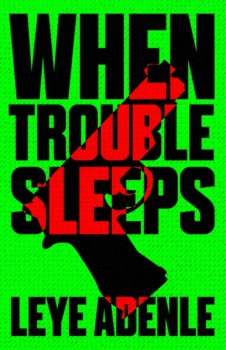 Lagos lawyer Amaka Mbadiwe makes herself a target for assassination when she tries to save a man from a street killing and becomes involved in political and sexual corruption at the highest level.

He is from a family of writers, the most famous of whom was his grandfather, Oba Adeleye Adenle I, king of the Oshogbo tribe in South West Nigeria. Adenle has no pretentions to royalty, but as winner of the Prix Marianne in 2016, and whose short story, The Assassination, was a finalist for the 2017 CWA short story dagger, plus satirical pieces under various names, acting – he was in the London run of Ola Rotimi’s Our Husband Has Gone Mad Again – plus writing and recording for BBC Radio 4 and World Service, has kept him busy enough to stifle any thoughts of succession!

Amaka returns in this complex, fast-paced and utterly gripping sequel and when she tries to stop a Lagos street mob ‘necklacing’ a man and his girlfriend finds herself in more trouble than ever, despite her previous brush with superstition, witchcraft, prostitution, corruption, robbery, drugs, murder and the trade in body parts.

When a plane crash kills the state gubernatorial candidate, assured of election by corrupt billionaire political backers, they pick the unlovely Chief Ojo to replace him. Ojo has plenty to hide. Not only did he beat and leave for dead a girl in The Harem, a secret sex club, he has also been involved in underage sex acts of which he made pictures and videos on his phone.

Ambassador’s daughter Amaka, herself a member of Nigeria’s elite, has copies of this evidence of his paedophilia and is the only person standing between him and election. Ojo sends hired guns to kill her, as does his powerful father in-law Chief Balogun. Amaka, with some help from her friends and some unlikely ‘street’ sources, must outwit them all to survive.

If this at times terrifying and always thrilling, story, written with great panache, which unflinchingly explores the relationships between power, money, sex and politics seems a little too high-octane for readers brought up on the relatively mild politics and more or less hidden crime of Britain, take a moment to think on the setting of Adenle’s unredeemably noir tale.

Lagos, the corrupt heart of possibly the most corrupt country in the world, is a city of violent contrasts. From the indescribable luxury of the homes of crime billionaires, their luxury cars, aircraft, high class whores and champagne flutes, to the open drains, filth and poverty of the mega-city’s back streets, Adenle’s vivid descriptions spare you little – and drag you right in.

His characters are their own persons, no wishy-washy Western excuses. They are what they are with no explanations, no apologies – and as a result far more three-dimensional and realistic. Their world is dark and disturbing, yet even in the darkest moments he manages to introduce touches of humour which relax the tension.

His descriptions of the plight of the street kids, young village girls forced into prostitution, the addicts, the robbers, the addicts, the killers for hire, the endemic corruption, are so gripping that you actually find yourself wishing that somehow justice will be done.

This compelling and shocking thriller with a pace which never relents shines a very different light on the Dark Continent.