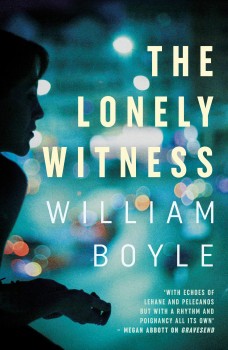 Former party girl Amy Falconetti now helps the house-bound receive communion while trying to sort out her own attitudes. When she witnesses a street murder, she fails to report it and instead trails the killer.

British readers may struggle with William Boyle’s follow-up to his debut novel Gravesend. Despite its themes of change and uncertainty, The Lonely Witness is just so American, reflecting the highs and lows of the national psyche.

Again set in the Gravesend neighbourhood of Brooklyn, a once almost solidly Italian working-class immigrant district of New York, Boyle produces an intimate portrait of a neighbourhood in vivid, evocative prose, and explores how place and the past combine to make up individual personalities.

Amy Falconetti has changed her lifestyle and persona after the break-up of her lesbian relationship with actress Alessandra. Despite not liking the Gravesend area, she has nevertheless stayed, gradually changing from hard-living party girl to a conservatively dressed Eucharistic minister, administering communion to elderly house-bound Catholics.

Abandoned, dislocated and lost, Amy lacks both direction and identity, living her minimal and minimised life in a small, dingy basement flat. She visits an elderly dementia sufferer, whose carer is ill and who has sent her son to carry out her caring duties. His behaviour frightens the old lady who asks Amy for help. She impulsively decides to follow him, prompted by childhood memories of a murder she witnessed and about which she said nothing – and when he is killed in a street stabbing, Amy, without thought, pockets the murder weapon and leaves the scene.

With her paranoia rising as she realises that she can identify the killer – and he may have also seen her – Amy embarks on a series of seemingly insane, dangerous and opportunistic decisions driven by desperate dreams as her life spirals out of control.

She tries to return to her former existence, but soon realises that once again she does not fit. She is lonely and alone, diminished and powerless, someone life happens to, wanting to do good but finding no room for forgiveness. Lacking the capacity to connect, she nevertheless fears being hurt and abandoned and ultimately losing what is at best a tenuous grip on her own identity.

Amy’s character is multilayered, subtle and nuanced, framed by circumstances that test her character, moral values and resilience – both redeemer and seeking redemption.

All this is played out against a background of loneliness, where an army of the elderly in a rapidly changing city struggle to live with their regrets, grief, loss and disconnection. Boyle offers a close-up and intimate portrait of a neighbourhood and explores how place and the past make us who we are.

This tense, gritty and realistic story, at times darkly funny, is an engaging and immersive read with a strong sense of place and a complex protagonist so cleverly portrayed the reader will never be totally sure of her true personality.