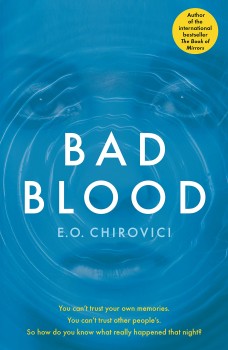 Joshua Fleischer awoke in a hotel room with a murdered woman. Now, 40 years later, he needs psychiatrist James Cobb to help him find out what happened.

James Cobb is a renowned American psychiatrist who specialises in memories, particularly distorted and lost ones. Joshua Fleischer is an extremely wealthy philanthropist. But he is dying, and one question is eating at him as devastatingly as his cancer; what happened in the Parisian hotel 40 years ago? Joshua asks James to unlock his memories using hypnosis to find out if he was the one who murdered Simone, the woman he loved.
At first, James is reluctant. But the unsolved mystery and the conflicting perspectives from those who possibly have the answer draw him in. Interest becomes obsession, and James’s fixation will lead him across the Atlantic to Paris, the past and a pack of lies wrapped in distortions and false memories.
I’m a trained hypnotherapist, so the premise of this novel intrigued me. With plenty of well-known facts and hypnotherapists’ opinions that struck a chord from early on in this story, I was soon hooked. That the first third of the book read somewhere between a lecture for post-graduates and a case study did not particularly disappoint me, although I am certain many readers would find the terminology and intensity hard reading.
James Cobb is not a character I fell in love with; he is rather pompous and self-absorbed, which is somewhat at odds with his reasons for investigating the unsolved mystery. Joshua Fleischer is, at first, a character who engenders sympathy. But as the reader finds out about his earlier life, he and his estranged friend Abe unravel. The other characters, including Simone, are undeveloped, some only appearing on stage in the latter part of the story. And all are unreliable, in keeping with the theme of this book.
As each new character comes to light, whether through conversations, letters or diaries, the truth about that fateful night seems to disappear behind a wall of fog. This intensifies the pacing and intrigue, despite there being a total imbalance of introspection and dialogue versus action. At times, the amount of dialogue is laborious, giving the sense of tell, not show. And the individual voices are indistinct. That said, the first-person point of view gives intimacy to the story.
I had to prop up my suspension of disbelief in places, including during the several breaches of practice. And the rushed and convenient denouement, which unfortunately I had already guessed because of some obtrusive foreshadowing, was disappointing.
There is a reasonable sense of the different eras in which the story takes place. Although there is no originality to the description, the sense of place is evident, particularly when Paris is the backdrop.
However, overall this book astounded me. Yes, there are some quirky word choices and small hiccoughs in a handful of sentences, but English is the author’s second language. I applaud his grasp and literary prowess. I also thoroughly enjoyed the story, despite my above criticisms. For those readers who find the first part of the book somewhat dry, I suggest they plough on as its flavour changes from a case study to a crime investigation, and this is a story with plenty of meat on its bones.