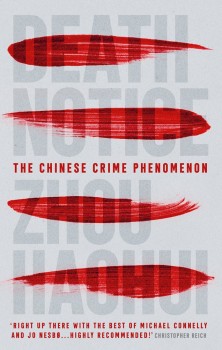 Chengdu police find it difficult to cope with a man calling himself Eumenides, who acts as self-appointed judge and executioner of those whose crimes have gone unpunished.

Chengdu Criminal Police are shocked when a senior police sergeant is found with his throat cut. Arriving at the scene, senior officer Captain Han finds Pei, another officer of the same rank from Longzhou, already in situ. Pei had been called to the site by a message from someone who knew his history, someone who has been posting notes on the internet asserting that he will deliver justice to those which the law has failed to convict, and who names himself Eumenides.

After this horrific opener, Eumenides leaves notes with people he proposes to punish, or rather to kill, copying his words to the police as a challenge to stop him. Han is confident that the resources of the police will prove adequate, but in a series of attacks Eumenides demonstrates that he has sufficient cunning to outwit the forces of law and order. More bloody deaths follow.

It eventually becomes clear that Eumenides knows both Pei and Han well from events some 20 years previously. Both were junior officers at the time and became embroiled in significant cases with multiple deaths. In one the officer was regarded as a hero and promoted; in the other the officer was deemed to have made a grievous error and posted out in the sticks. How far these judgements were justified finally becomes apparent.

A fairly large police team is assembled to combat Eumenides, all coming across as rather naive and unsophisticated by Western standards, earnest and dedicated. The single exception is the computer-savvy Zeng, a cheeky youngster. Han, the Captain (Chinese police use military ranks), is prone to frequent and powerful statements of intent before rushing into action without much thought beforehand, not a recipe for a successful outcome.

Eumenides has had many years to plot his campaign but even so many of his Machiavellian schemes seem overly-complex and successful completion a matter of luck. He is so clever, in fact, and the police so lacking in smarts, that Eumenides has to explain it all to them so that the truth is revealed before the end of the book.

Death Notice is the first of a trilogy, spawning a popular TV drama in China. Grisly murders and a manipulative foe defying the police will no doubt always hold appeal, but there’s a distinct lack of subtlety.