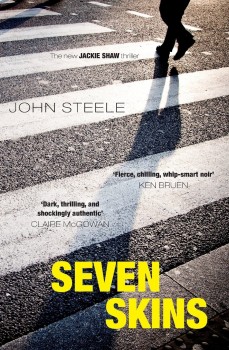 John Steele announced his arrival with the introduction of the fearsome Ulsterman Jackie Shaw in his cruel, shocking, tense and spectacular debut Ravenhill. That explosive story of the paramilitaries exposed the fear and terror which gripped Belfast during the Troubles – and charted its modern development into a cross-community criminal underworld.

Now he follows up with another intelligent, unsparing, well-written and fast-paced story, again featuring Protestant hardcase Shaw, the former soldier, Hong Kong policeman and undercover RUC operative, once a ‘planted’ member of the Belfast East Brigade of the UDA, the larger of the two so-called loyalist paramilitaries.

I’ve met men like Shaw, both in service and later as a reporter during the Troubles. They served in the short-lived Royal Irish Rangers, the Inniskilling Fusiliers and the RUC and represent the best and worst of Ulster. Peaceable, even gentle, once moved to anger they become implacable, willing to go to any lengths to destroy what they believe is wrong.

Having extricated himself from the chaos of Belfast, Shaw is living a quiet and, for him, peaceful life in a Cotswold racing stables. The only concession to his past is that he keeps up his firearms skills. It is an asset he will need as he is coerced by the security services into an off-the-books investigation into a ‘hit-list’ of retired security operatives all at one time linked to the Province.

Two words scrawled above a list of names recovered during a police raid on a dissident republican arms cache indicate six targets for assassination. As they begin to die, Shaw is tasked with discovering – and dealing – with the killers.

Two are vicious professionals, one an ex-American Marine, the other a former Ulster paramilitary with a love of torture and killing. They have been joined by an idealistic young Anglo-Irish terrorist, brought up and indoctrinated by heroic tales of the ‘struggle’ against British imperialism, but with no knowledge or understanding of the bloody consequences involving innocent bystanders.

As Shaw begins his quest, he quickly realises that the British security services, as in Ulster, are confused and divided and also the killers and whoever is directing them, are deeply enmeshed in the underworld – in this case the vicious Albanian gangsters running people trafficking, vice and drugs in London’s Soho.

An Albanian girl, kidnapped, trafficked and prostituted, is on the run after being used as a ‘honey trap’ in one of the killings. Her path and Shaw’s cross as he attempts to find their next target, an ex-Belfast police officer now living rough in the capital.

While the killers stalk their next victim, Shaw trawls the city’s underbelly in search of their target and also tries to protect a girl desperate to escape the brutal traffickers. To do so, outnumbered and disavowed, he is ready to tear an entire city apart to uncover what or who are the Seven Skins – and save their own lives.

The good and the bad of London come alive as do the historical references in a fast-paced story with plenty of character, twists and turns to keep the reader hooked. If I have a reservation it is that Steele is allowing his hero to become a cross between Superman, the Terminator and Rambo.

Shaw is convincingly tough, motivated and absolutely set on his task. But his ability to survive and instantly recover from a series of wounds and torture which would put a platoon in hospital and his instant access to hi-tech accessories such as directional microphones and recording equipment somehow strike a false note.

Despite that, if you want an all-action and mostly horribly believable thriller which charts the links between terrorism and crime, this will keep you glued to the page.