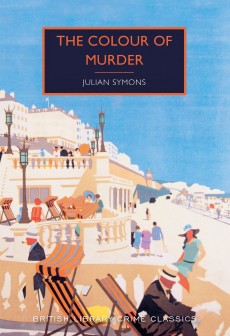 The Colour of Murder

An unhappy young man trapped in a loveless marriage faces the death penalty for a crime he claims not to remember, the brutal beating to death of a girl with whom he had become obsessed.

The prolific Julian Symons, one of the very best British crime writers of the 1950s, is almost completely forgotten, so it will be a real pleasure for readers who want more than action or brilliant detection to pick up this masterpiece of court case procedural.

Symons had a distinguished reputation as a social and military historian, biographer and critic. His crime novels, strikingly individual and expertly crafted, saw him named a Grand Master of the Mystery Writers of America, a distinction only previously awarded to three British writers – Graham Greene, Eric Ambler and Daphne du Maurier. Symons succeeded Agatha Christie as the president of the Detection Club and was also awarded the Cartier Diamond Dagger by the British Crime Writers Association.

Those brief historical facts should give an idea of just how highly rated he was by his peers – and in my opinion, still should be. This story, one of two the British Library is re-issuing, is basically a murder mystery. But in keeping with his reputation as an innovator, Symons approaches it in what was then a revolutionary way to widen the spectrum of crime fiction writing with a character-driven plot which more than 60 years later still grips the reader.

John Wilkins, a repressed and unhappy young man trapped in a loveless marriage, is the prime – and only – suspect in the brutal beating to death of a girl with whom he had become obsessed on the stony Brighton beach. He is the naive, unreliable narrator whose inferiority complex, fantasies and confusion are laid out in a series of interviews with a psychiatrist which forms the first half of this remarkable story. But does this first-person profile explain the tragic events, or is there a more sinister driving force?

The second part is a positively forensic description of his trial for murder. There’s the examination and cross-questioning, a formidable and balanced judge’s summing-up, which offers no hope of appeal for bias or points of law, and a thorough and detailed examination of the case.

But there is far more than the simple story of a murder. It is really all about the characters involved before and after the event and a brilliant social history of the 1950s which captures the mood, tenor and mores of the time, along with the pretensions of those taking advantage of the fluid social mobility of post-World War Two England.

Symons cleverly establishes a character who has lost his grip on events even when they favour him and who seems unable to understand or explain what is going on, misreading situations on a daily basis.

Those around him in this complex situation, particularly the women, are contrasting characters. Symons manages to offer so much difference between them, especially the women, with most, including the lawyers, seemingly having mixed motives.

But all, from small details of speech to larger life choices, behave in a completely realistic way to offer a carefully wrought observation of life and times, centred on a powerful picture of a man on the edge.

Even at the end, a slightly predictable final twist to the plot fails to detract from what is a powerful story which not only explores the failures of the human mind, but also takes a penetrating look at the very nature of justice.