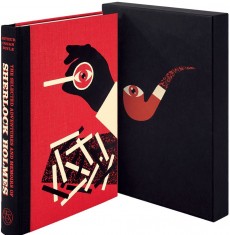 The Selected Adventures and Memoirs of Sherlock Holmes

What is there left to say about the Sherlock Holmes phenomenon? An unrealistic and overdramatised TV series revealed Conan Doyle’s brilliant, if flawed, consulting detective to a new generation, but in truth Sherlock, despite what may or may not have happened at Reichenbach Falls, has never gone away.

Twice after his career had been definitely terminated by the author, Holmes was brought back to fictional life by public demand, so great was reader appetite for these superlative narratives of the solution of crime by minute deductive reasoning.

Now the Folio Society, publishers of exquisitely presented classics, quarter-bound in blocked cloth with blocked cloth case sides – the way proper books used to be – has produced a collection of ten of the very best of the 56 Sherlock short stories with a thoughtful introduction by Baker Street Irregular Michael Dirda and a series of contemporary and unsettling illustrations by Max Löffler.

It’s expensive, yes, but this is a book to cherish and keep, to pass on to the next generation to remind them of the greatest master of the detective genre. But for the brilliant and prolific Conan Doyle who also authored successful medieval historical novels, ghost and horror stories, swashbuckling tales with a military background, contemporary romances, comedy and science fiction, Holmes’ genesis was no easy ride.

A Study in Scarlet and The Sign of Four, now regarded as classics, introduced him to the reading public, established his gifts and his relationship with his biographer Dr John Watson, were both well received, but made no great impact. It was not until Conan Doyle, who up to that point had been a practising doctor, began to send his stories to the newly set up Strand Magazine that Sherlock mania took off.

The first monthly series of six included A Scandal in Bohemia, the comic, almost absurdist The Red-Headed League and possibly his best – certainly his personal favourite – the near Gothic horror of The Speckled Band, all of which feature in this collection.

By the end of 1891, Holmes was a runaway hit, both at home and internationally and has remained so ever since. Despite a string of modern imitators and resurrectionists, no one has come close to replicating his impact. Fans will argue endlessly over the relative merits of the ten stories chosen, but as Holmes, somewhat given to hyperbole on the subject, would insist, each offers a unique view of his talents and experience.

From the eerie word-clues of The Musgrave Ritual to the almost bucolic setting of the horse-racing setting of Silver Blaze, they will open the doors of a near-imaginary England of the 1880s and 1890s where gentlemen were just that and villains of all shades were unmistakable to Holmes’ eagle eye. This is a quite outstanding collection.