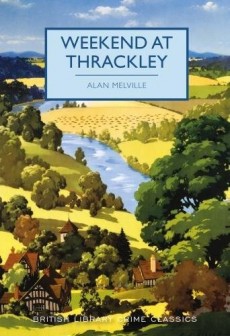 Impecunious war hero Jim Henderson is baffled to be invited to a weekend party at the country home of a famous collector of precious stones. Robbery, kidnap and murder follow.

Some of our more senior readers may remember the author, almost a ‘light entertainment’ fixture in the late 1950s when the BBC provided the only national TV and radio channels.
The affable Alan Melville – a sort of Stephen Fry of his day – had a varied career as broadcaster, writer, actor, raconteur, producer, playwright and wit. He would have been proudest of the two final soubriquets.

Born William Melville Caverhill in Berwick-on-Tweed, he was a boarder at the Edinburgh Academy. Starting work in the family timber merchants, he won a trip to Canada in an essay competition, then submitted six short stories, The Adventures of the Pink Knight, which he also narrated, to BBC Children’s Hour.

After a spell as a lyricist he joined the BBC in 1936 as a scriptwriter in the variety department. In World War II he served in the RAF as a war correspondent, took part in the Normandy landings and was in Germany for the surrender. During those years he also wrote three revues which ran for five years at the Ambassadors’ Theatre before he was signed for London Films by Alexander Korda. After the war he wrote several plays, two of which were filmed, and musicals.

As chairman of The Brains Trust and a panellist in What’s My Line? Melville became one of Britain’s first television stars, writing and appearing in many television programmes, among them A to Z. Why the British Library have chosen to republish his first novel in their successful, insightful and educational Classic series is beyond me. Quite frankly, it’s silly!

A cross between the stiff upperlipness of Biggles, the upper-class inanities of Bertie Wooster and the overly theatrical badness of Fu Manchu, this purported country house mystery is perhaps a prime example of the ‘light’ nonsense foisted on the reading public and BBC listeners during the Depression years of the 1930s.

It bears the thinnest relationship to the life of the rich and privileged – and none at all to some of the scenarios it describes. The murder of an undercover Scotland Yard detective is covered in a few lines, largely detailing how his body is in the way, then never mentioned again!

The plot, such as it is, involves a weekend party at the country home of the mysterious Edwin Carson, a collector of precious stones who has a murky background. All the guests, bar one, are wealthy with heirloom jewellery of their own.

Captain Jim Henderson, MC, cannot imagine why he belongs in such company. He’s unable to settle after his war service, and has been out of work for three years, although apparently still able to pay for lodging and membership of a good club while ignoring his tailor’s bills. He finds himself in the company of an aristocratic, but dim, old school chum, a titled perennial charity organiser, an unpleasant ‘artistic’ brother and sister and an unbelievably beautiful exotic dancer. In a weekend of attempted robbery, kidnapping and unpleasant death, Jim blunderingly unravels a mystery from his past.

There is absolutely zero character development amid a great deal of frothy nonsense. Such humour as there is appears to be largely focusses on the idiosyncrasies of the lower classes, although the guests are not immune.

Lines such as: “Freddie Usher and I went to the same school, which can usually be trotted out as an excuse for pinching another man’s car” – in this case a Rolls Royce(!) – merely emphasise the unreality of this strange cross between Wodehouse, Buchan, Allingham and Rohmer.

The book is both patronising and condescending, and my only surprise is that the BBC, with its normal attitude towards the ‘little man’, didn’t take it up. After a long run of successes, the British Library can be forgiven for a total flop in what has otherwise been a fine series.