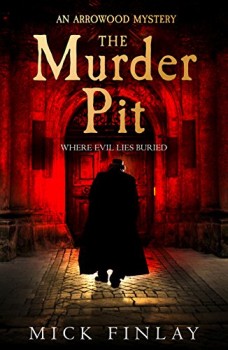 Down-at-heel detective Arrowood and his assistant Barnett are hired to find out why a new bride will not see her parents, but what seems a straightforward case develops into something more sinister.

Pompous, jealous, foul-mouthed, hard-drinking, shabby Victorian private eye Arrowood hardly seems in the same league as the ascetic, intellectual and upper-class Sherlock Holmes.
But Mick Finlay’s unlovely, unmistakably South London character Arrowood, together with his partner/assistant, the practical, pragmatic and none-too-honest Barnett, is proving to be a remarkably effective antidote to the current rash of Holmes resurrectors and imitators.

On the surface Arrowood is not a particularly nice man. A down-at-heel detective at the lower end of society, his cases come from the poor and needy rather than Holmes’ high-society, high-reward clientele. He is also egocentric, seeing himself as a rival to the Great Detective and cannot bear to read of Holmes’ successes. His reactions are always well done, amusing, and form a constant background thread.

The pair are hired to discover why a new bride is refusing to see her parents. But what seems a straightforward case quickly develops into something far more sinister. They are forced to confront a series of conspiracies, corruption and mysteries – even murders – that pitch them into what appears to be a never-ending nightmare.

One of the focal points of the story is the Victorian attitudes to mental health issues and physical disabilities. Finlay, who teaches psychology and has also researched political violence, persuasion, and verbal and non-verbal behaviour, spares the reader no detail of how the Victorians treated those with such conditions. “They don’t feel pain like the rest of us” about sums up both the professional and public attitude. But Finlay handles the subject as sympathetically as several visits to an asylum will allow and weaves in the views of the experts of the day.

The story, as in the partners’ debut, is related by Barnett in a world-weary, but affectionate streetwise style, with some delicious language and plenty of sardonic Cockney humour lightening what at times is a dark subject.

Finlay develops the backgrounds of Arrowood and Barnett to give a fuller picture of what are essentially two anti–heroes. They are again supported by a splendidly drawn cast of characters including Arrowood’s tough and determined sister, the former Army nurse Ettie.

The dialogue is nicely tempered, reflecting the personalities and prejudices of all the characters in a well-researched and convincing story set in the lower levels of Victorian society, with violence, exploitation and a level of poverty gentleman detective Holmes never really deals with well depicted.

Finlay has a sound grasp of Victorian social history, and a good enough knowledge of late 19th century London – although the idea of Catford as a close-knit farming community will seem strange to modern readers – to make both setting and action authentic and plausible.

This cleverly constructed follow-up marks Finlay as a name to follow and Arrowood as a detective whose turn for fame may have come at last – more than 120 years too late!