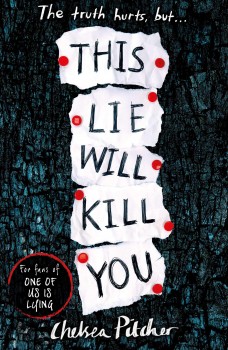 This Lie Will Kill You

Five teens are invited to a murder-mystery evening at an old house. The prize for the one who solves the puzzle is a valuable scholarship. They all want it, but none of them expects to have to contend with the mysterious Ringmaster.

Juniper Torres dreams of becoming a doctor, but her grades might not be good enough to get her the scholarship she desperately needs. Then a mysterious letter arrives, inviting Juniper to a murder-mystery dinner along with a group of her classmates. The one who solves the crime and unmasks the killer will win a valuable scholarship. Juniper immediately dismisses the invitation as a scam, but her mother doesn’t think so, and wants Juniper to go along. It’s a party, it’ll be fun. Juniper isn’t convinced. But it does provide Juniper with the opportunity to contact her former best friend …

Ruby Valentine’s family have struggled to make ends meet since her father left, and that’s something Ruby blames herself for, despite what her father did. She’s had an invitation as well, and she’s intending to go. She’s been told to take something with her, though – something she has to take from the locked safe in the basement and smuggle out of the house without her mother knowing.

Parker Addison is the school’s golden boy. He’s rich, good looking, everyone’s dream friend. But he’s also jealous and controlling, and obsessed with Ruby, even though she doesn’t want him as a boyfriend again. Brett Carmichael comes from a struggling family, too. His father was once a professional boxer, but now his hopes for a bright future have faded and it’s down to Brett to succeed where his father failed. Brett’s also Parker’s wingman and would do anything for him. Gavin Moon is the outsider, never part of the popular in-crowd at Fallen Oaks, despite being a talented writer and musician.

The five teens are all bound together by one thing: someone died in a burning car a year ago. One of them knows the truth, and it’s that truth the person who calls themselves the Ringmaster is determined to discover in a classic locked-house mystery, redolent of some of Agatha Christie’s classic set-piece murder-mysteries.

The slight problem I had with This Lie Will Kill You is that it wasn’t easy to suspend disbelief for some integral parts of the plot, such as how the person was able to engineer the set-up in the deserted mansion in the middle of the woods, something that was never adequately explained. The identity of the Ringmaster and their motivation becomes obvious fairly early on, and from there it’s simply a case of sitting back and waiting for a fairly convoluted set of past actions to unravel.

But the book’s strength lies in the well-drawn teens, all of whom come over as distinct, intriguing personalities, refreshingly easy to tell apart as the chapters swap points of view, to give all of them sufficient airtime. The complicated and intertwined backstories gradually converge and the truth – or rather fractured versions of the truth, all seen through the distorted prism of self-interest – starts to emerge.

There’s a good mystery at the heart of This Lie Will Kill You and I was able to push my questions about the set-up to one side and watch with interest as the events that led up to the first death in the woods gradually became clear. The only question became how many deaths would follow…