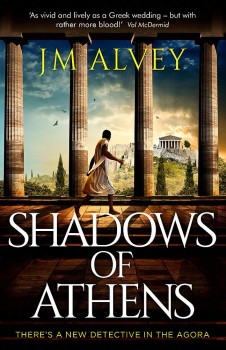 When aspiring Athenian playwright Philocles finds a murder victim on his doorstep, he hopes it’s nothing personal, but events soon prove otherwise.

The year is 443 BC. After decades of war against Persia and Sparta, Athens is finally at peace, and the city is starting to experience prosperity again.

Philocles, an aspiring playwright, has finally got his big break and is about to see the comedy he’s written performed for the drama competition at the Dionysia. Imagine the X Factor finals being performed at the Albert Hall and you’ll get some idea of what this means. People are flocking to Athens from all over the Hellene world and the spotlight will be on Philocles. If his masked chorus muck up their steps or come in on the wrong cue, his hopes will crash and burn. And, of course, there’s always the worry that no one will find a play called The Builders funny.

What Philocles doesn’t want is a distraction, but that’s exactly what he gets when he comes home late at night from rehearsals and finds a bloodied corpse on his doorstep. The man died by having his throat cut, but, to Philocles’ surprise, there’s no evidence that he’s been robbed. The fact that he’s still wearing a pair of expensive red leather Persian boots is a bit of a clue, and Philocles knows a thing or two about leather, as leather-working is his family’s business.

Having found the man on his doorstep, Philocles is curious to know why he got there. He doesn’t think there’s any connection to him, but when some unpleasant graffiti is daubed on the walls of his house, he begins to think there is something personal going on, and he wants to get to the bottom of it.

Shadows of Athens is an excellent addition to the ever-growing list of historical crime books set in just about every period imaginable. I jumped on it with glee, as Greek history was always my favourite when I was in my teens, and it was great to haul my old A Level textbook, Cyril Robinson’s A History of Greece, off the shelf so I could check a couple of dates. JM Alvey has picked a great period for what I hope will become a series. In a time of relative peace, there’s plenty of scope for more ordinary crime, where one dead body will get noticed.

Alvey captures the period perfectly, and I very happily settled back into it as Philocles’ investigation progressed. The sights, sounds and smells of Athens wrapped themselves around me like a familiar and much-loved woollen cloak. Nothing bounced me out of the period, although there will always be purists who object to the use of modern swearing, but it takes more than the occasional ‘fuck’ to throw me out of the time, and I find that sort of thing less intrusive than attempts to recreate ancient swearing, although throwing in a few ‘by Ares’ balls’ is also fine. And when it comes to the big performance of The Builders, I was as amused as the audience by the dick jokes.

Although it was only an incidental part of the plot, I was impressed by the performance and could easily see the play fitting into the history of Greek comedy. If you’ve not ready any, give it a try after finishing Shadows of Athens. I recommend starting with The Frogs by Aristophanes. He’s a bit later than Philocles, but you’ll get the general idea.

The plot worked well for me against the backdrop of growing complaints from the Greek colonies on the Ionic coast about the amount of tax levied each year by Athens. And Philocles’ other paying work, that of a jobbing speech writer, fitted in nicely. Philocles’ partner, Zosime, who isn’t an Athenian citizen, and his Phrygian slave Kadous both play their part in the story, and it will no doubt shock readers when it becomes clear why Philocles doesn’t want Kadous to become a witness in any legal proceedings as under Athenian law, the testimony of a slave could only be taken under torture. In some ways, thankfully, the world has moved on.

In Philocles, I think Alvey has a main character who can stand shoulder to shoulder with the great Falco, over in Rome, and his daughter, Flavia Alba, who’s now having adventures of his own. Shadows of Athens is historical crime at its best, with the crime, and the motivations of the perpetrators standing up to scrutiny both in the context of the story and the context of the time in which it is set.