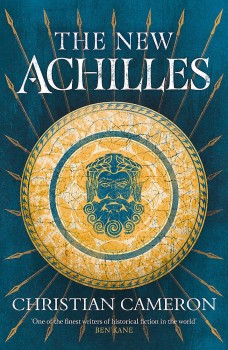 Former soldier Alexanor is now a healer priest in the sanctuary of Epidaurus in ancient Greece, but when the brutal reality of war ends up on his doorstep, his fate becomes bound up with the man who will become dubbed the new Achilles.

The year is 228 BC. Alexanor is a Rhodian marine, one of the few survivors of a vicious naval battle. Attitudes to survivors in ancient Greek were not exactly liberal, to say the least – it was age that prized heroic death and defeats almost as much as it prized victory. Branded a coward by his family, Alexanor turned his back on a life of warfare to become a priest at the great sanctuary in Epidaurus in the northern Peloponnese (the top right of the bottom segment of Greece, which is joined to the Attica peninsula by a thin land bridge).

But trouble is never far from anyone’s borders at that time and even sanctuaries come under threat. Sparta still has expansionist tendencies and the peace of Alexanor’s temple is disturbed when a small troop of men fleeing another bloody battle bring a half-dead soldier there and demand both healing and sanctuary. The Spartans, led by an unpleasant character called Nabis, aren’t far behind and in the inevitable confrontation, Alexanor makes a bad enemy.

The soldier survives and Alexanor’s fate becomes inextricably bound with his in this stunning historical thriller that sweeps across the battlefields of the warring states of both what is now Greece and the island of Crete. Christian Cameron is no stranger to historical fiction and The New Achilles is the latest in a long line of books by him. This start of a new series has reawakened my once-insatiable desire for all things ancient Greek. Reading this was like coming home after a long absence.

His recreation of the world of soldier-turned-healer priest Alexanor and the farmer-turned-soldier Philopoemen (pronounced Philopmen, I think) is stunning in its depth and detail, but the historical accuracy is not the be-all and end-all of the books and his characters have modern turns of phrase, and the barrack room language would be familiar to any modern soldier, and why not? I’d rather the characters sound like real soldiers, rather than something out of a Ray Harryhausen film (but don’t get me wrong, I love them, too!)

They also act like them too, and the depictions of the bloody battles of the time are not for anyone who prefers history to be sugar-coated. Life – and death – in that period was often brutal, but not without its humour, as was evidenced by inscriptions on slingshots such as ‘take that’ and ‘catch’. Cameron captures both the brutality and the humour and weaves an epic tale around real historical people like Philopoemen and his friends and companions such as Alexanor and the loyal, sarcastic cynical soldier Daemos who deserves a spin-off series all to himself.

Philopoemen is the leader that was so desperately needed in a time of huge strife between warring states, but he’s someone who’s never made his way into the popular consciousness, something that this book will remedy. He deserves to be better known, and Cameron achieves that in consummate style, showing, rather than telling, how he earns the epithet of the new Achilles. The next phase of his adventures can’t come too quickly for me.

One thing that would be helpful for anyone with an even passing knowledge of ancient Greece, though, is to clear up any confusion that comes from references to Philip and Alexander, both Macedonians. It’s only natural to immediately think of Alexander the Great and his father, but the dates are wrong for that, and the Philip referred to here is Philip V of Macedon (not Philip II, the father of Alexander) and the dashing Prince Alexander isn’t Alexander the Great, as he lived 100 years earlier. Now don’t forget this, class, as I’ll be testing you later! Having that explained in the historical note at the end would save readers a lot of confusion, but that’s a very minor criticism of one of the best historical thrillers I’ve read in a very long time.