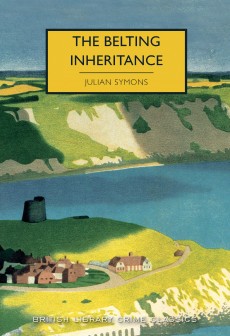 The owner of Belting, Lady Wainwright, had four sons, the eldest two of whom, Hugh and David, were reported killed in World War II. However, one day a car arrives at Belting and a man gets out, claiming to be David.

The Belting Inheritance was originally written in 1965, but if one didn't know that the novel had been published in the mid-1960s the style and content might have indicated that it belonged in the 1930s. The setting of the country house, with its autocratic owner and quarrelling relations, was something of a cliché in crime novels of that period, but not one that survived the war to any great extent.

The quarrelling in this case is caused by the return of David, one of Lady Wainwright's sons, who had been reported as killed in the war. He claims to have spent years as a prisoner of the Russians. She is completely convinced that he is who he says he is but the two remaining sons, Stephen and Miles, are not and are afraid that she may leave money in her will to an impostor. The narrator, Christopher Barrington, is determined to learn the truth. He is Lady Wainwright's great nephew, with whom he had lived since being orphaned at the age of 12.

This is a situation which today's reader, accustomed to DNA tests, may find difficult to accept. Even a reader of the period and unfamiliar with technological advances might, however, have felt that a mother was the most likely person to recognise one of her children, even if she hadn't seen him for years. We are told that she was ill but there is no indication that her mind is failing. It is difficult to accept that all three could not easily agree on whether this man was genuine or not.

A novel that begins with such an unlikely set of circumstances is liable to require an equally unlikely continuation – and so it proves. Apparently, Symons regarded the book as a failure because of the number of coincidences it contained – an opinion with which the reader is likely to agree. To assist the plot and to bring it to some sort of ending the villain of the piece seems to assist in his own undoing by carrying incriminating material around with him and then either losing it or leaving it where it can easily be found.

But if the plot is unconvincing the characterisation is perhaps even more so. Miles seems to have no function except simply to make bad jokes, just about the only thing we learn about Stephen is that he wears his collars too tight, and Lady Wainwright is the usual aloof and ill-tempered aristocrat.

One of the least successful aspects of the book is the first-person narration. Unusually, the narrator is only 18 years old but seems to regard himself as better-placed to solve the mystery than anyone else. In addition, he is full of literary references – to Oscar Wilde, Max Beerbohm, Wilkie Collins, George Bernard Shaw, Henrik Ibsen, Christopher Fry et al.  None of these has anything whatsoever to do with the story and it seems that Barrington – and through him, the author – merely wants to indicate how well read he is. He is just on the point of going up to Oxford but it is difficult to see just what he could possibly hope to learn.

The solution to the mystery, when it arrives, is just as unconvincing as the original premise.  For readers familiar with Bleak House, there is a kind of Jarndyce and Jarndyce moment which is not altogether unexpected, after which I put the book down almost with a sense of relief.