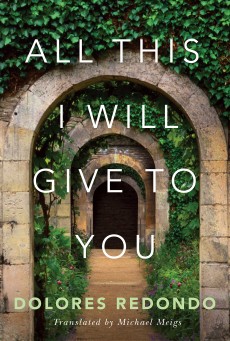 All This I Will Give To You

Novelist Manuel Ortigosa is devastated when his husband Alvaro is killed in a car accident, and astounded when he finds Alvaro is a marquis from a wealthy family.

Writer Manuel and his successful businessman husband Alvaro live in Madrid. Manuel is in disbelief when informed that Alvaro has died in a traffic accident, and furthermore that this happened in Galicia. On arrival there, he is amazed to hear that on the death of his father three years previously Alvaro had inherited the title of marquis and responsibility for a significant landed estate.

Manuel is told that the estate has been left entirely to him, but this brings no consolation. The family are hostile, and the way Alvaro deceived him leads Manuel to doubt what he thought he knew about his partner. He is initially determined to turn his back on Galicia and return home but is persuaded to stay when a retired policeman Nogueira makes him aware that Alvaro’s death was not the straightforward accident it appears.

With the help of Nogueira and a priest and childhood friend of Alvaro, Lucas, Manuel begins a lengthy investigation into a number of dubious local events, starting with the suicide of a priest at a seminary attended by Alvaro and his brother Santiago many years ago, and culminating with the death of Fran, the third brother three years earlier, and that of Alvaro himself. In digging for the truth he exposes a catalogue of lies and by the end arrives at a better understanding of himself.

This is a long book for a crime mystery. The revelations are well measured to encourage the reader to guess at the answers just ahead of the protagonist, and this helps to sustain interest, although some may find the pace frustratingly slow. The story is enhanced by a picture of an ancient estate, in some ways idyllic but in others dominated by the ghastly aristocrats who run it as they have for centuries: arrogant in their own superiority and dedicated to their own enjoyment and continuation of the family line.

The protagonist Manuel takes a very long time to overcome his initial hurt and frankly his over-dramatised reactions to every setback become rather wearing. He has a long back story for which his writing, including the book the reader holds in his hands, is a cathartic experience.

The book is impressive both in terms of scale and in the care with which the book has been put together. Redondo also has restrained her inclination to weave local superstitions into the narrative, such a major part of her Baztan series. The translation is excellent, and the story is rolled out in a very confident and accomplished manner.