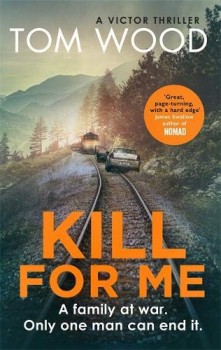 Killer-for-hire Victor is hired by a drugs cartel boss to kill her own sister who she is fighting for control of their dead father’s multi-billion empire.

If your idea of ‘fun’ – one early reader’s comment – is a description of a beautiful women using her manicured nails to rip out the tongue of an employee purely to set an example to encourage the others, then this latest episode in Tom Wood’s Victor series will be a must-read.

This time the enigmatic hit-man slaughters his way through Guatemala’s none-too-hidden drugs underworld as two sisters engage in open warfare for control of their dead father’s empire of trafficking routes from producer countries to the unbelievably brutal Mexican cartels and on into the massive American drugs market.

As chain-sawed, shot, knifed or ‘necklaced’ bodies of their sicarios – low grade gunmen – pile up, the elder hires Victor, a cold, amoral, former CIA and MI6 hitman-turned-freelance killer for hire to end the war by assassinating her sister.

In an atmosphere of endemic corruption among the police, army, judiciary, legal profession, bankers and politicians, in-country agents of America’s Drugs Enforcement Agency and the few ‘straight’ locals are powerless.

But this unemotional anti-hero, with his ruthlessly analytical approach, no backstory or future and a sense of self-preservation so developed he does not even trust those who employ his skills, finds himself at the centre of a storm of betrayal and counter-betrayal in the hot and humid and endlessly dangerous atmosphere of Guatemala City.

Kill for Me is gritty, brilliantly paced and well researched with Wood’s trademark action sequences, and is everything readers have come to expect from a Victor novel. Set pieces put the reader in the thick of the action and intrigue, yet his greatest skill is to make his almost robotic character strangely endearing.

Victor, a Bond on steroids, is obviously educated, with cultured tastes, fluent in many languages and occasionally capable of showing a positively gentlemanly side when it does not affect his goals, but otherwise remains a two-dimensional character.

The test of any action adventure is the frantic pace and the action itself, which must never become clumsy. Wood deploys the basic technique of unmistakably flagging up the real baddies and never letting the reader forget whose side they are on.

Part of the trick is technical authenticity, and his knowledge of weaponry, surveillance techniques and brutal hand-to-hand combat would do credit to the SAS or any intelligence service.

Wood’s simple, often ingenious, plots are delivered with all the subtlety of a steel-toed boot in the crutch. The books are hardly great intellectual tomes to stir the mind, but are hugely enjoyable additions to a long tradition.

‘Fun’ is not a description I could ever apply, but if you’re a fan of the genre, it’s a great read!