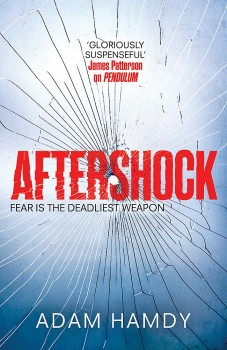 If you haven’t read the preceding books in this trilogy you will not have much of an idea about what is happening. Adam Hamdy’s overarching plot and frequent references to events which happened earlier make it almost impossible to follow this as a standalone.

Basically, a widespread and elusive organisation known as the Foundation and made up of politicians, businessmen and sections of the military is trying to bring down the governments of Britain and America by any means possible.

Author and screenwriter Hamdy has taken a series of real events over a long period and war-gamed them together in an unreal scenario which requires a massive suspension of disbelief to even contemplate.

So far, so Cubby Broccoli! But Aftershock out-Bonds any of the late producer’s wildest flights of filmic fancy with the addition of a body count which makes Rambo look like a Sunday school picnic!

Major characters from the first two books return. Patrick Bailey now leads a Metropolitan Police task force to disable and dismantle the Foundation. Across the Atlantic, FBI agent Christine Ash struggles with trust issues as she leads the American response. Photographer John Wallace is attempting to live under the radar as he seeks a way to assuage his guilt over earlier errors.

Each battles their own demons and their internal guilt plays a major part in the plot development. Ash is unable to forget her treatment while being held hostage and is paranoid over potential infiltrators on her team.

From the first of its 500+ pages this climactic story sets a hectic pace as Bailey is forced to watch as Foundation killers plan to hang his girlfriend as a message to the British parliament.
To save her, he must perform a rescue which beggars imagination. Then, physically and emotionally damaged, he calls upon the few friends he trusts to aid his quest for retribution.

As Bailey, Ash and Wallace try to destroy the wide-reaching organisation, imprisoned Foundation members – not all acting in accordance with its philanthropic recruitment promises of a societal wealth redistribution – attempt to strike deals with both sides.

These cat and mouse games are cinematically played out in tense and violent clashes on both sides of the Atlantic. With the three principals finding more loyalty among their underworld contacts than colleagues, Hamdy’s depiction of good and evil leaves the reader questioning the meaning of the words.

Gangsters, drug dealers and arms salesmen display more bravery and honour than the shady businessmen or governments whose actions are justified by self-declared legality. Hamdy’s thought-provoking questioning of the blurred lines around how laws are made and broken and who is punished adds depth to an otherwise disjointed narrative.

A preponderance of killers, conspirators, betrayals and an overemphasis on action and death makes it difficult for readers to become involved, as do characters lacking depth or sympathetic appeal.  Some of the conspiratorial and secretive aspects are better done than others, but overall this final part, like its predecessors, fails to meet the basic rule of good action fiction – and be at least partially credible!