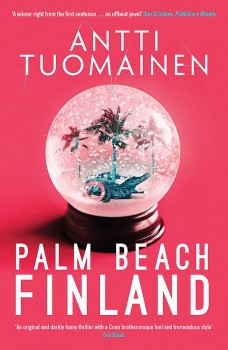 Top undercover detective Jan Nyman travels from Helsinki to a newly established holiday resort, Palm Beach Finland, to investigate a murder and the main suspect Olivia Koski in whose house the victim was found.

You haven’t experienced a proper summer holiday until you’ve been to the small Finnish seaside resort called Palm Beach Finland, huge letters announcing its status as the hottest beach in the country, and the neon colours are probably visible across the Baltic. OK, so the continuous wind, grey clouds, non-Mediterranean air and near-freezing water might have kept tourists away so far and the word hasn’t got around yet but the owner Jorma Leivo knows the status quo will soon improve.
He’s invested his inheritance money into the project and believes in this dream of creating the perfect relaxing summer place for all Finns, a haven where they can enjoy foreign-style fun without all the nasty bits, such as heat for example.
The only problem with expanding his business empire is a small matter of a plot of land belonging to Olivia Koski, who has recently returned to her old dilapidated and frankly ugly home, and which Jorma has absolutely required. Hence his decision to make Olivia’s life a touch unpleasant which in turn could influence her to sell the land. So simple, so genius.
He engages the services of his thick-as-thieves, and thick anyway, employees, the lifeguard Chico and the cook Robin, to disturb her sense of peace and security in own house. Though a corpse of an unknown man in Olivia’s kitchen isn’t actually the result he had anticipated.
The local police fail to identify the victim or find the killer but are convinced that it’s definitely a professional job, judging by the evidence on the scene. Yet the investigation has hit a wall.
Enter Jan Nyman, super-efficient detective of the covert operations unit of the National Central Police, who is sent from Helsinki to investigate the murder. He’s undercover of course and allowed to use any means possible to solve the murder. As a slightly awkward maths teacher called Jan Kaunisto, he rents one of the garish chalets, decides to learn surfing in the icy sea and gets to know Olivia Koski, who’s became the main suspect.
His methods are unconventional and often questionable but seem to bring some results in this little charade where a cast of a businessman with a vision, two useless penniless friends, a determined woman with a string of failed personal relationships, and a strange rich investor interested in the dead man all play significant roles. No one trusts anyone else. The web of lies and secrets surrounds them, but any mention of money, especially potential hard cash, makes them consider totally different scenarios with hilarious consequences.
Antti Tuomainen’s firm position as a creator of dark, difficult noir tales will remain strong but it’s great to see him venture into the lighter moods, flavoured with hysterical situations and consistently well-drawn characters. Whether it’s Olivia desperate to renovate her childhood home, Chico dreaming of becoming the boss, Holma wanting to avenge his dead brother or a policeman on the verge of finding real love, Tuomainen masterfully creates fictional but genuine people that we can fall for. He also keeps the narration on the rollercoaster track, constantly changing the direction it’s taking, while the laughs hide the always-present desires to have a better life, even in the most ridiculous conditions.
Kudos again to the translator David Hackston who brings the Finnish surreal humour and engaging style to English readers. Palm Beach Finland is a hell of an unforgettable holiday trip.