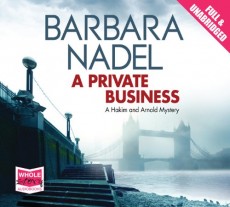 Lee Arnold and his assistant Mumtaz Hakim are hired by former stand-up comedian Maria Peters who wants to know why she’s being targeted by someone determined to make her question her own sanity.

A Private Business is the first book in Barbara Nadel’s thoroughly excellent Hakim and Arnold series that has kept me entertained on numerous long journeys on French autoroutes during the past year. No, I’m not reading in the car, I’ve been listening to the audiobooks, and each one has brought the stories and their characters vividly to life.

I’ve gone through the series in a completely random order, but that’s never harmed my enjoyment, even though it’s provided plenty of plot spoilers as I started near to the present and started leapfrogging backwards and it was good to jump back to the beginning in this first outing for private investigator Lee Arnold, a tough, no-nonsense former soldier and ex-copper.

Lee is struggling to make ends meet in his agency but has taken on Mumtaz Hakim as his assistant in the hope of attracting some Muslim women, and others from that community as clients. His gamble seems to be paying off, but things are still rather hand to mouth.

The year is 2012. East London is preparing to host the Olympic Games and there’s frenetic activity around the construction site. There’s also a flasher active in the area, and DI Vi Collins, a good old-fashioned thief-taker and Lee’s occasional lover, is determined to deal with the nuisance before the problem escalates.

Lee and Mumtaz have been engaged by former stand-up comedian Maria Peters who wants to make a comeback to the stage. Maria is the woman who put the potty into the words potty-mouthed and her brand of humour certainly isn’t universally popular. Odd things are happening around Maria and she’s starting to get rattled. Things are moving around in her house, even though there’s no evidence that anyone has been there apart from Maria herself.
Lee and Mumtaz quickly realise the woman is in a fragile mental state and they think there’s a possibility she’s being taken for a ride by the pastor of a local bunch of happy-clappy Christians. She’s also not being entirely honest with them about various things from her past …

Barbara Nadel’s East End is certainly a warts and all version of the area that doesn’t quite match the chirpy Cockney sparrows on Eastenders. She’s got a large and diverse cast of characters from Mumtaz’s spiky, streetwise daughter Shazia, to her likeable parents who are keen to see her remarry, but not keen for it to go badly wrong like it did last time with her abusive husband who left her badly in debt when he was killed in a knife attack.

Both Mumtaz and Lee are also likeable characters, as is the blunt Vi Collins, and Nadel weaves a good tale of crooked churches, sleazy characters and past problems. The story hasn’t dated, despite the backdrop of the Olympics, which does feel a long time ago, but apart from that, the story positively oozes contemporary problems, and Paul Thornley’s superbly versatile narration brings the characters and the situations to life. This is a series that deserves following, and I can’t recommend it too highly for anyone who likes to listen as well as to read.