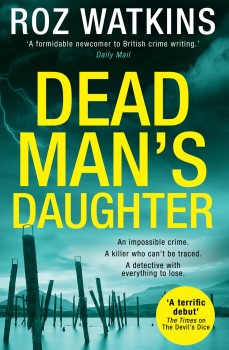 When DI Meg Dalton finds a child in a bloodstained nightdress in woods and the child’s father dead in the house with a cut throat, she doesn’t want to believe the young girl is guilty of murder, but all the evidence seems to point to her.

Roz Watkins’ debut, The Devil’s Dice, had a huge hook for me as it involved caving, but her main character, DI Meg Dalton, proved to be the draw for me when her second book, Dead Man’s Daughter, came along. Most fictional coppers lug around enough baggage for a long-haul flight, and Meg is no exception. As a child, she found the body of her older sister who had hanged herself, and the shock of seeing another suicide victim who had died the same way led to a breakdown and Meg’s move to Derbyshire.

She’s closer to her mother and grandmother now, but that brings with it the added pressure of seeing her grandmother’s slow and irreversible decline, and the prospect of being party to helping her grandmother go to Switzerland to end her life at a time and in the manner of her own choosing. That’s not something that’s likely to go down well with her bosses in the police force if they find out what is being planned.

Dead Man’s Daughter hits the ground running when Meg is accosted by a frantic woman in the woods near a spot dubbed Dead Girl’s Drop, who claims to have seen a child in a bloodstained nightdress running through the woods. The woman was right, and Meg soon finds the girl, who seems to have no recollection of how she got into the woods or why she’s covered in blood, despite being injured. Without waiting for back-up, Meg investigates the girl’s home, a lonely house in the woods, and finds a man who’s been stabbed to death.

Her boss, DCI Richard Atkins, wants a quick result on the case, and as everything seems to be pointing to the child, Abbie, there’s a lot of pressure on Meg to wrap the case up, especially as she has time booked off the following week, so a protracted murder enquiry isn’t something she’s keen on either, but nor is she convinced that Abbie is the killer.

Roz Watkins fields a varied police team, from DS Jai Sanghera to DS Craig Cooper, the man Meg thinks of as being the nastiest cop in town. Jai is inclined to listen when Meg expresses doubts about Abbie’ guilt, but Craig certainly isn’t. He needles Meg every step of the way, seemingly seeing it as his vocation to make her life difficult, something which he goes about with a degree of aplomb. He skirts a fine line where stereotypes are concerned, but Watkins manages to keep him from being a one-dimensional plot device. She also does a good job with semi-lapsed Sikh, Jai, who no longer wears a turban or adheres strictly to his religion.

Meg is determined to investigate the murder of Abbie’s father thoroughly, despite the pressures she’s working under, and the case soon takes a sharp left turn into the somewhat esoteric area of cellular memory and the question of whether a heart transplant will lead to the recipient taking on some of the donor’s characteristics. I enjoyed that dimension, and Watkins wears her research lightly but convincingly in a plot that quickly gathered pace and had no difficulty in sustaining my interest throughout the numerous twists and turns of this excellent and original police procedural.