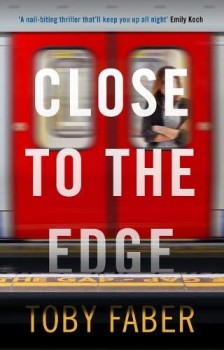 Close to the Edge

When Laurie Bateman sees a man fall to his death in front of a tube train, she has a need to make sense of what happens. The police seem convinced it was suicide, but Laurie is certain that’s not the case, and she becomes determined to carry out her own investigations.

With the huge press of people at peak times in London’s busiest tube stations, it’s always something of a surprise to me that more people don’t end up on the tracks in the path of an oncoming train. It’s not something you expect to witness, though, but for Laurie Bateman, that stray thought becomes a shocking reality. She’s standing next to a man at Euston station, he turns to her and for a moment, there’s a connection between them. She thinks he was about to tell her she had a smudge on her nose from trying to fix the chain on her bike, then he’s gone, carried away by an incoming train.

Shocked by what she’s seen, Laurie completes her journey to work and gets through the day in a daze. As she unlocks her bike on her way home, she bumps into a handsome stranger who fixes the problem. Laurie thinks he might ask her out and feels faintly disappointed when he doesn’t ask for her phone number, but it’s not long before she meets him again, and this time he does arrange to go for a meal with her.

The thought of the man she saw die is never far from her mind, though, and Laurie wants to get to the bottom of his death. The police, when they finally get around to taking a statement from her, seem certain he commited suicide, but Laurie doesn’t believe that, and sets off on a dangerous journey that will take her deep beneath the streets of London, into long-abandoned underground stations, as she attempts to find a metal object she saw fly out of the man’s hand in his desperate attempt to regain his balance

Toby Faber, former MD of Faber & Faber, certainly knows London, and captures the hustle and bustle of the capital from the point of view of someone who lives with its daily pressures. Twenty-something Laurie braves the traffic on her bike and puts up with her dull job at an investment firm, glad of a break from the routine when she’s asked for some help by one of the fee-earners, and it’s a sad indictment of the job that the most interesting thing she’s been asked to do all week is set up a spreadsheet.

Laurie lives in a flat share with her cousin and still rings her dad nearly every day, escaping frequently from London’s pressures to go back to Somerset to see him. In some ways she’s a typically busy young woman living a life of semi-loneliness while surrounded by people. In other ways she’s anything but typical, and there the problems start.

I love books that thrust ordinary people into deeply extraordinary circumstances. So far, so good. But once in those extraordinary circumstances, I do like their actions and motivations to make sense, and that’s where Close to the Edge spectacularly failed to convince me. I just didn’t buy Laurie’s desire to break into an abandoned tube station and make her way deep underground to hunt for something she only caught a glimpse of rather than simply telling the police what she thought she saw.

On the subject of the police, Faber almost lost me in the first few pages with an equally fleeting mention of the dreaded term WPC, a term that Laurie isn’t even old enough to remember. Then he lost me again when Laurie succeeds in kicking open a heavy door in a desperate flight from a couple of heavies. It’s actually really, really difficult to kick doors open, as a firefighter friend of mine once told me, and someone as lacking in height, weight and heavy boots as Laurie was would have stood no chance.

The other thing I found hard to swallow was the reluctance of a seemingly ordinary woman like Laurie’s cousin Jess to engage with the police after being assaulted and handcuffed to her bed for nearly two days. And after that, things only get worse in the hard to take stakes. I read to the end in the hope of a satisfying twist that would make sense of everyone’s actions, but it didn’t come.

The unravelling of the mystery surrounding the dead man was interesting, although it proceeded in a series of bunny-hop info dumps, and the basic background plot did mostly make sense – it was just that I failed at almost every turn to make sense of the characters’ actions. On the upside, Close to the Edge is a winner where sense of place is concerned and for me that was its main strength.