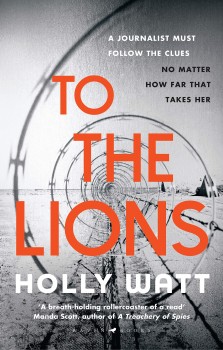 Reporter Casey Benedict eavesdrops a conversation in a London club and investigates the apparent suicide of a wealthy young man. Her hunt leads her from St Tropez to the Middle Eastern deserts – and the darkest corners of the human mind.

Author Holly Watt made her way into a reporter’s job with the Sunday Times, switched to the Telegraph and is now with the Guardian. Years of investigative work – credits include the Panama Papers and the MP’s expenses scandal plus worldwide stories – gave her the idea of writing a book featuring determined, physically brave and occasionally spiky undercover reporter Casey Benedict.

The plot owes not a little to Casey's surreal experience in a nuclear bunker beneath one of deposed Libyan dictator Muammar Gaddafi’s palaces. In one corner were piles of expensive Italian shoes. Soon after she met a man who son had played for a soccer side which beat one of the Gaddafi sons’ teams and was fed to their dogs – alive.

Libya is a shambles. Following Blair’s wooing of Gaddafi, Cameron allowed himself to be be influenced into military action without understanding the nature of the rebellion and failing to identify the Islamist extremist element. Among the consequences have been IS opening a new theatre of war and failure to secure all Gaddafi’s arms dumps has seen increased terrorism across North and West Africa and the Middle East.

Thousands of refugees, fleeing war and economic disasters further south or simply seeking a better life in Europe, are held in makeshift and insanitary, camps. But this tide of human misery has not stopped governments – and companies – trying to exploit the situation, particularly control of Libya’s oil reserves. The power-players who control these companies are ambitious, ruthless, and used to getting their own way, and the politicians equally so.

Casey is tipped off by a conversation overheard in a London club, and investigates the apparent suicide of a wealthy young man. Her hunt for the truth takes her from glamourous St Tropez to the Libyan deserts – and the very darkest corners of the human mind.

This superbly plotted debut offers possibly the most horrific concept I’ve come across in a crime novel. It is completely sick, frighteningly plausible and utterly unforgettable! At the same time Watt manages to make the reader question the value of human life and consider what it means to be human with some beautifully written and quite tragic descriptions of life in the camps.

This is a rollercoaster of a book packed with insider knowledge – Watt’s newsroom scenes, filled with the rivalry, comedy and friendship, are the very stuff of journalism, although many investigative reporters would love her department’s budget! To the Lions is quite sensational. This really is a case of ‘hold the front page’!