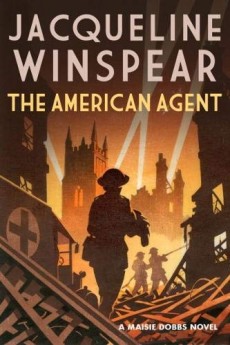 Investigator Maisie Dobbs is approached by the British and US governments to help solve the murder of an American war correspondent in London during the Blitz.

By definition, if a thriller doesn’t thrill, it’s not doing its job. Across the wide variety of the genre, the common ground is the intensity of emotions they create, particularly those of apprehension and exhilaration, of excitement and breathlessness.

This clever and immersive story manages to combine the intellectual end of the spectrum with hard fact and a superb description of life at one of the most difficult times of our history.
The London blitz – following the Luftwaffe failure in the Battle of Britain, the capital was systematically bombed for 56 of the 57 days and nights from September 7 1940 – is the backdrop as Maisie Dobbs investigates the death of Catherine Saxon, an American journalist determined to become part of the great Ed Murrow’s team of reporters and broadcasters documenting wartime Britain’s hardships in a bid to change then neutral America’s attitudes.

Saxon’s death is covered up by British authorities, but a former contact Robert MacFarlane, the link between Scotland Yard and the Secret Service, asks Maisie to work with US Department of Justice agent Mark Scott – who helped her 1938 escape from Munich – to uncover the truth.

As terror rains from the skies and thousands die, Maisie must balance the demands of solving the case with her work as an ambulance driver and her need to protect Anna, the young evacuee she has grown to love and wants to adopt.

Entangled in an investigation linked to American political intrigue – the unlovely US ambassador Jospeh Kennedy, an America First isolationist and Nazi sympathiser – being played out in Britain, Maisie faces losing her dearest friend and must also deal with the possibility she might be falling in love again.

Maisie, a Lambeth-born costermonger’s daughter who began her working life at 13 as a servant in a Belgravia mansion and has seized every chance to gradually morph into a renowned private detective with her own agency and links to the security services, has evolved into a deeply sympathetic character. She represents everything that Americans – and we ourselves – think is best in the British character. Despite her claim to a title through her late husband, she is very much an ordinary, although exceptionally talented, brave and determined, woman.

Winspear has produced a thoroughly believable thriller, a page-turning tale of war and love, duty before self, terror and survival. There’s also a superbly portrayed cast in a gripping setting which makes it a great read.