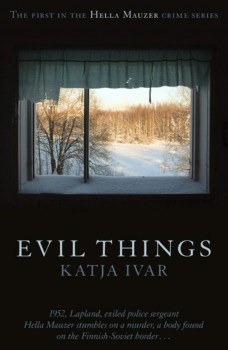 It’s 1952. Hella Mauzer, the first female Inspector in the Helsinki Homicide Unit, has been deemed too emotional for her job, demoted and sent to a small-town police station in Lapland. She sees a chance to redeem and prove herself when an old man disappears in the forest.

October 1952, Lapland, Finland. Hella Mauzer was the first female Inspector in the Helsinki Homicide Unit. After witnessing a horrendous murder and dealing with its aftermath, she is deemed too emotional for the job and reassigned to a small police station in the deepest north of Lapland.
Working life in Ivalo is boring, and personal isn’t much better. There’s a doomed love affair with a married man, her own family dead in a tragic accident, a lack of classic female looks – or what’s considered a lack and often pointed out to her – and lack of prospects to marry a suitable man. Though her boss Chief Inspector Eklund has thought of pairing her off with a one-eyed lumberjack lorry driver.
However, Hella wants to investigate the disappearance of an older man, Erno Jokinen, from a remote village beyond the polar circle close to the Soviet border. According to the sceptical Eklund, people vanish in the snowy forests all the time, hence there’no point in wasting administrative resources.
Somehow Hella manages to convince him and sets off to the village of Käärmela, also named Snake’s Nest. There she stays with an Orthodox priest Timo Waltari and his wife Irja who became guardians of a six-year-old boy Kalle, who was waiting alone in the house for four days for his grandfather who had never returned. The boy and the couple seem to harbour some secrets
Hella wastes no time in getting familiar with the now-abandoned house, the surrounding area and the locals. After six days of combing through the forest, not long after she arrives, a local search party finds a mutilated female body with a gunshot wound. She makes a huge effort to be reasonable and efficient, but with no moral nor technical support her every step and every question seems like a huge struggle against the villagers, gentle caring Irja and too handsome ex-revolutionary Father Timo.
She is stubborn as hell, a feminist before her time, fighting against the social constraints, misogyny and the authority which dismisses fairness and justice. And she’s desperate to find the killers and to prove that ordinary people can bereated fairly. Hella constantly battles with her own feelings to keep them at bay but also to appear as professional as possible in a man’s world. The fluctuating relationship between her and the priest’s wife is very well described as both women follow different paths, but a fragile friendship develops.
Evil Things is Katja Ivar’s debut novel. The author grew up in Russia and the US, finally settling down in Paris. Her eye for historical detail has made it possible to present a remarkable picture of the little-known history of Europe during the Cold War.
I loved the sharp taut style that so perfectly sets up the claustrophobic and difficult era after the end of World War II when both the Russians and the Finns wanted to dominate Lapland. Citizens from both countries are watched by the Security Intelligence Service SUPO that keeps files on everyone. Secret messages are being sent between those in power. Fear and uncertainty permeate everyday life. There are accusations of spying from both sides, violations on the border and increasing tensions with the Soviet Union.
International conspiracies add to the overwhelming feeling of hopelessness and as more information comes to light Hella realises that she might be the only person trying to right what’s wrong within the system and the society.
The location, although some parts are completely fictional, evokes strong emotions. You can feel the cold, darkness and hardship. I’m already looking forward to the next instalment in the series – and I’m sure Hella will not be quiet as expected.