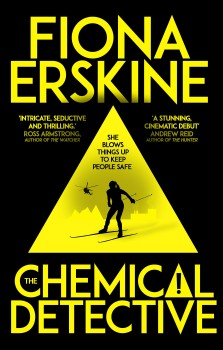 Chemical engineer Dr Jaq Silver, working on avalanche control, uncovers a problem with a consignment of explosives which leads to her life being put at risk before she is framed for murder.

Whatever I say, I’m bound to be accused of being patronising or sexist, so I’ll get my excuses in early! A feminist action thriller with a principal to rival Bond, Bourne or Reacher is long overdue. But Fiona Erskine’s kick-off to a series featuring Dr Jaq Silver, scientist, skier, international jet-setter, explosives expert and very much a 21st century woman with what could be described as a healthy social life, doesn’t quite cut it.

The author’s own blog decries the lack of female action heroines – but it is in that action that the failure lies. As a launch for a new character it is brilliant. As an adventure story, it needs a little more punch and a good deal more believability!

It may be sexist to point out that not one woman has so far qualified for the Parachute Regiment, the Royal Marines, or passed the Senior NCO’s Battle Course. Those who have tried have been held back by a sheer lack of physical strength. But the freewheeling Dr Jaq combines physical feats any Special Forces soldier would be pushed to emulate, making Lara Croft look like a little girl. She also excels in her specialised job, goes clubbing, pulls men 20 years her junior, sleeps with them and moves on, drinks, keeps fit, and has it all!

Erskine keeps her plot tense from the start. Every pause leads to a new twist. Every twist leads to another problem. Intricate and thrilling, her writing vibrates with danger and at times positively shines with wit. A couple of scenes near the end are incredibly cinematic.

Dr Jaq is very much the focus and readers will wonder how much Erskine’s own career is reflected in her. She had a self-admitted tomboy youth, followed by the hard educational grind to a Master’s degree, a chemical engineer with ICI on Teesside, branching out into areas such as welding and explosives, and now running her own international company. As a female engineer, she is often the lone woman in board meetings, cargo ships, factories and offshore rigs.

The Chemical Detective, which deals with the areas and the problems Dr Jaq must face with arrogant, career-building, company-oriented men, is a great feminist story. It is where she becomes involved with organised crime and mercenaries that things go astray. Dr Jaq is working on avalanche control in Slovenia when she uncovers a problem with a consignment of explosives. After complaining to the supplier, a multinational chemical company, her evidence disappears.

She is warned, threatened, accused of professional incompetence and suspended, but taking her complaint further, she narrowly escapes death, only to be framed for murder. Dr Jaq escapes from police custody and sets out to find the key to the mystery.

From the ski slopes of Eastern Europe, to sunny Portugal and even that most glamorous of locations, rainy Teesside, the pace mounts. Finally, in the radioactive Pripyat marshes of northern Ukraine in the shadow of Chernobyl nuclear power plant, she uncovers a shocking truth.

It’s clever, it’s accurate, it’s possible and it’s brilliantly told, and far better than a weakish ending which owes more to Fleming than Erskine. If Dr Jaq can stick closer to the areas which the author knows so well and writes about with such authority, The Chemical Detective may yet fire up from this slightly damp squib to a true explosion.