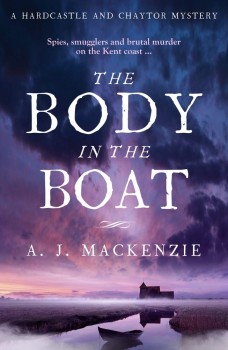 The Body in the Boat

A coffin in a boat on Dungeness beach sees the Reverend Marcus Hardcastle and his friend Mrs Amelia Chaytor investigate a huge fraud and a plot that threatens the nation.

AJ Mackenzie, the pseudonym of Anglo-Canadian husband-and-wife team of historians and writers Marilyn Livingstone and Morgen Witzel, have packed it all into the third of their superb 18th century adventure series featuring semi-reformed alcoholic Reverend Marcus Hardcastle and his friend Mrs Amelia Chaytor.

The Body in the Boat is a fast-moving story involving smuggling, fraud, corruption, bank failure, drug trafficking, treason, espionage and murder all set in the misty, feverish, Romney Marshes – and it adds up to a clever and gripping atmospheric page turner.

The testy vicar of St Mary and his redoubtable female companion, the widow of a diplomat involved with the British intelligence service, witty, bright, independent, daring, athletic, a crack shot and brilliant horse handler, compare favourably to John Steed and Emma Peel of the hit 1960s TV series The Avengers.

Hardcastle, the one-time rising intellectual star of the church, brought down by his own failings and now a temporary justice of the peace, is slowly adjusting to life in an isolated parish whose major source of income is avoiding ever-increasing excise duty on goods such as brandy, port and lace that’s levied to finance a war with France. His progress is aided by his friendship with Mrs Chaytor, a woman years ahead of her time, socially aware and compassionate after years of foreign service.

Each of the three of stories has focused on a different aspect of the pre-Napoleonic period, the late 1790s. Characterisation throughout is superb. Minor players such as the tough smuggler who doubles as village constable and Hardcastle’s annoying Gothic romance-writing sister are well drawn and developing nicely, aided by some clever use of historical and geographical detail.

As a coffin is found in a boat on a lonely beach in Dungeness, a successful and respected banker holds a birthday party for his wife. Within days, he too is found in an abandoned boat in the Channel – shot dead. Hardcastle and Mrs Chaytor find themselves drawn into the worlds of finance and organised crime in a dramatic and dark Georgian mystery, a twisting tale that brings 18th century Kent to vivid life. They must investigate what links this apparently senseless killing to the smugglers, why the local bank has been buying and hoarding gold, as well as who or what was in the mysterious coffin.

The women, in an age when they were little more than wallpaper, are satisfying strong yet surprisingly believable. A tight plot with a menacing level of violence and death and a good denouement will keep you turning the pages.

If there is to be a criticism of what is developing into a fine series, it is that it’s all becoming a bit Midsomer Murders. Even given the often savage nature of the smuggling trade, how many bodies can you find in one small village? Also, the politically and socially correct portrayal of the isolated, independent and superstitious people of Romney Marsh rushing to welcome 2,000 refugees is frankly unbelievable.

But the bleak marshes, with their winds, fogs and air of savage desolation, provide a perfect background to an old-fashioned and rumbustious tale with plenty of humour leavening its more serious side.