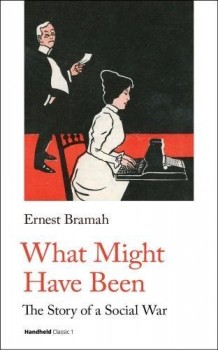 What can you say about Ernest Bramah’s remarkable 1907 political thriller set in an alternative England fewer than ten years in the future – but still applicable today?

The biggest question is why this new edition of the original 1907 edition – it was abridged and republished as The Secret of the League just two years later and in one form or another has sold a massive 360,000 plus copies – is on offer with its missing 7,000 words restored at a time when the debate over Brexit offers a not too improbable parallel to the key issue in Bramah’s story?

This remarkable piece of speculation features political polemic, science fiction, prophesy, dystopia and thrilling episodes that rival Buchan and CS Forrester, along with others bordering on the farcical, plus plenty of parody, irony and light humour.

Bramah’s prophesy hits the mark with his predictions for the Labour party – at the time of writing it held just 30 seats – and its eclipse of the traditional Liberals, although as yet it has failed to achieve the dominance he foretold; the popularity of flight just four years after the Wright Brothers first took to the air; the cypher typewriter, surely a forerunner of the Enigma coding machine; the facsimile system; fundamentalist Christianity; advertising; the tabloid press and postcodes!

The story bears comparison to others from the era. H G Wells reflected his socialist beliefs in The Time Machine and War of The Worlds, Ford Maddox Ford expressed opposing views in The Inheritors, while Joseph Conrad’s The Secret Agent, also published in 1907, attacks revolutionary socialist groups and ideologies.

A Labour government is elected with a huge majority on extravagant promises to destroy capitalism. The coalition of trade union representatives and theoretical socialists are forced to raise taxes, then raise them again and again to pay for the unsustainable programme their electorate has come to expect.

Ranged against them are a coalition of the upper and middle class, led by Sir John Hampden, a name redolent with history – one of the Five Members of the Commons, whose attempted unconstitutional arrest by King Charles I and trial in 1637 sparked the Civil War. Hampden is still remembered at the State Opening of Parliament when the doors of the Commons are slammed in the face of the monarch’s messenger, symbolising Parliamentary independence.
Although the political divisions could so easily be made to appear black and white, Bramah was far too good a writer deal in stereotypes. His characters of whatever persuasion have depth. All wish to see a better and fairer country as the outcome.

This clever portrait of what must have been prevailing emotions of the time – fear of social change and revolution, enthusiasm for new technologies and the dread of looming wars – is a well-constructed and delightfully written work that relies as much on its finely delineated character descriptions as its fear of the social abyss.

Through car chases, bombardments, riots and perilous flights over a stormy southern England as the opposing forces battle for the soul and future of the country, even a hint of a love story, so necessary to books of this period, sealed in the flames of a burning Chelsea home, the reader will be kept glued to the page

A superb critical introduction by Jeremy Hawthorn sets out the novel’s history, its themes and its connections with Bramah’s better known works, The Wallet of Kai Lung, and Max Carrados. It also offers a welcome addition to the otherwise general scarcity of material on Bramah – an intensely private man about whom little is known – and offers no judgement on his own political stance, which George Orwell, for one, was later to suggest approached fascism.

Take your pick – and pray that with the divide now looming between the two largest parties, Bramah’s major prophesy is not fulfilled more than 100 years later!