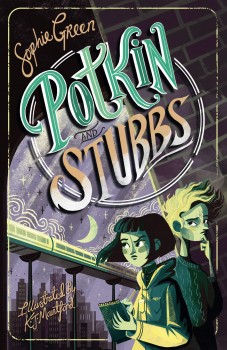 Aspiring journalist, 12-year-old Lil Potkin, finds herself with an unusual partner as she sets out to discover what happened to a young boy who’s gone missing.

Twelve-year-old Lil Potkin’s ambition is to be an investigative journalist but for that, she needs to find something to investigate. A badly-drawn poster for a lost or stolen toy on the notice board in Pelican City’s all-night bus station catches her eye. All great journalists have to start somewhere, even her hero AJ McNair, so Lil decides to make some enquiries.

She meets a pale, lonely-looking boy in the station waiting room. It’s cold in there, so she buys him a cup of hot chocolate, but it slips through his grasp as the lights flicker on and off. The boy seems surprised that Lil can see and hear him. That night, the same boy gives Lil a fright when he appears in her bedroom at night, claiming that her mum let him in. The boy tells Lil that there’s a story she can investigate, a missing person story. When she asks him who’s missing, he tells her that he is.

Lil is soon on the trail of a murderer, accompanied by the ghost of the victim himself, the strange boy from the bus station. The trouble is that he can’t remember who he was or how he came to be dead. He can’t even remember his name. Out of the ones Lil suggests, he settles on Nedly. Together they set out to find out what happened to him.

Sophie Green’s Potkin and Stubbs is a delightful junior version of the classic TV series Randall and Hopkirk (Deceased). Like Marty Hopkirk, Nedly Stubbs can walk through walls and turn the pages of a newspaper – if he tries very hard. The ability to move around without being noticed is certainly an advantage. The pair team up with down-at-heel former cop-turned private investigator Abe Mandrel who’s on the trail of a mobster who escaped being brought to justice.

It’s never made clear where Pelican City is, but the book has the feel of something set in the US in the 1920s, with corruption in City Hall and dark goings-on in the derelict Rorschach Asylum with its hordes of spectral rabbits. The story certainly has a feel of the Golden Age of detection, with added ghosts to liven up the proceedings. I was thoroughly captivated by both Lil Potkin and Nedly Stubbs, and I’ve got my suspicions about a possible connection between Abe Mandrel and Lil’s mother, Naomi, that I hope will be developed in the next two books in what is billed as a trilogy,

Potkin and Stubbs has a distinct Scooby Doo vibe, with an unusual detective duo who quickly establish themselves as indefatigable investigators, despite their young ages – Nedly was only 10 when he was murdered. Lil Potkin is determined, resourceful and never takes no for an answer. There’s an air of sadness about Nedly, which is hardly surprising, but in his friendship with Lil, there’s plenty of hope, too. Potkin and Stubbs has a good mix of light and dark, with laughs and tension in equal measure. This is quality crime fiction for younger readers and will go down well with anyone who enjoyed Jonathan Stroud’s Lockwood & Co series.